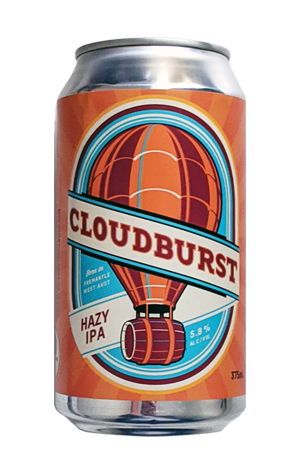 For all the music and lolly references that come to mind when approaching this addition to Otherside’s core range, Cloudburst actually has a localised heavenly drenching to thank for its name – and at least 18 months' worth of limited release, foggy knowledge and experimentation for the quality of the liquid. As a result, this hazy IPA debuts as a highly considered beer, replacing Indie XPA in the process, at the same time as Social Helles becomes a draught only offering.

Vic Secret, Citra and Bravo hops feature – triple dry-hopped and plush with pineapple, mango, OJ and pan-tropical character. Designed for smooth sessionability, head brewer Rhys Lopez says Cloudburst’s creamy oat and triticale-driven palate “finishes a bit drier and a bit more bitter to give it structure”, something which greatly aides drinkability, as does its sub-6 percent ABV. [One of a growing number of core range IPAs we're seeing settle on 5.8 percent ABV, the same as Feral's "no longer an IPA" Hop Hog – Editor]