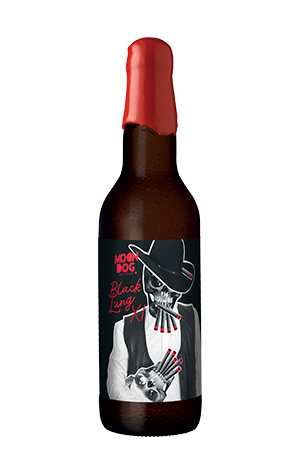 Moon Dog’s Black Lung series has been around longer than I’ve been writing about beer but there's one thing that has long bothered me about it. Each year they add a cigar to mark another edition and surely at one point they’ve got to run out of space?

Well, as Black Lung XI shows, 2021 is not the year they'll run out of room for cigars, with the skeleton on the bottle's second head and cowboy hat providing ample space. For those who haven’t enjoyed past releases (or woken at night in a cold sweat wondering where number 34 is going to hide those stogies), the series is all about creating the biggest and smokiest stout possible and then adding it to a barrel to let that oak and the former boozy inhabits of said barrel get to work.

This time around it’s been Tennessee whiskey from quite a famous, unnamed (but you could probably guess) distillery. Those spirituous notes of caramel and a sweet whiskey character knock back some of the beer's smokier elements, although it's still quite present and peated, and that in turn adds a warm edge along with the actual booze level of 12 percent ABV. Add in the beer's dark chocolate fudge, rich plum, a fruitiness and a tar-like appearance and you have a large, complex beer that nevertheless remains impressively drinkable.