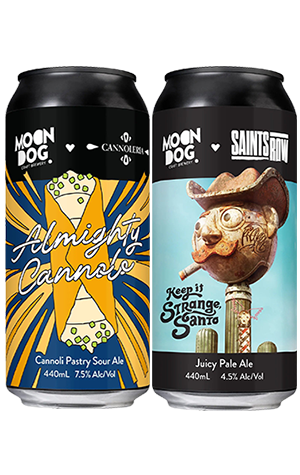 Moon Dog have been practising the fine art of collaboration, with two quite different partnerships released in quick succession. Almighty Cannolo is a pastry sour that replicates the classic Sicilian dessert and was made with Cannoleria (which is an offshoot of Melbourne’s excellent cheesemaker, That’s Amore). The beer was brewed with some 1,500 kilograms of whey from Amore’s ricotta and its creamy mouthfeel certainly evokes that soft cheese. Sure ‘cheesiness’ probably isn’t a word that might make you want to grab a can but here it works and that mouth-coating and rich texture is joined by flavours of sweet biscuit and a generous dollop of honey.

Meanwhile, the Moon Doggies have been involved in quite a different collab with the team behind the video game series, Saints Row. Sure, it might be called Keep It Strange, Santo, but compared with a cannoli-inspired beer, the juicy pale ale is a far more normal affair. Indeed, there’s plenty about it that reminds you of a classic American pale ale, with a somewhat sweet, biscuity base and decent bitterness starting things off before a soft array of fruity and tropical hops come forward.