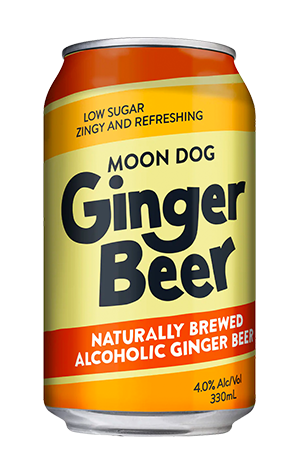 Moon Dog first released an alcoholic ginger beer in late 2021; a year or so later a new version appeared with a new look and a tweaked recipe.

Of v1 we said it "looks like one of those sports drinks made by dolloping powder into your drink bottle. It doesn't drink like one, however, instead serving up sweet, lemon-tinged ginger on the nose which is joined by something more savoury to taste. Spritzy, a little sweet, a little prickly."

So, how's v2? Well, clearly I'd forgotten what I'd written in 2021 (or maybe it was stirring in my subconscious) as this time around I went for "almost clear, powdered Hydralyte sports drink appearance" – at least both liquid and writer are consistent – "with enough fizzy popping ginger to make your eyes consider watering and your nose weigh up sneezing when inhaled." Add in lemony ginger aromas (as before) which lead into a back palate prickle and plenty of zip and you've got pretty much the same result, even if the methods by which they got there have changed.