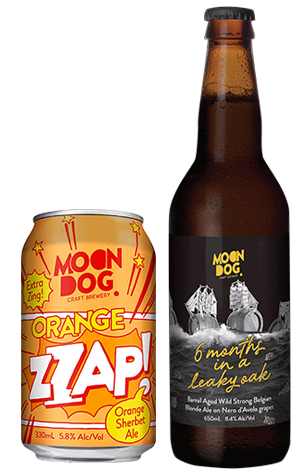 There aren’t really rules when it comes to Moon Dog beers but even by their standards, these two feel like they're on opposite ends of the beery spectrum. Orange zZap is an orange sherbet ale that contains an extract from the Electric Daisy flower to recreate the tingly effect sherbet has on the tongue*. It certainly works too, with that fizz dancing across the palate as the juicy orange flavours take you to a lolly aisle in the supermarket. But while this beer might take its inspiration from Sherbet Bombs, that unmistakably orange confectionary flavour had my mind racing to getting stuck into schoolyard Sunnyboys.

6 Months In A Leaky Oak meanwhile, is a strong Belgian blonde ale that spent, well, a certain amount of time aging in barrels that had housed Nero d’Avola grapes from Melbourne's Noisy Ritual winery. Those grapes haven’t just left plenty of flavour either as the beer pours with a deep red hue and a swirl of vinous aromas spilling out of the glass. While that time in barrel left its mark, there’s still a little of the base beer left behind with estery yeast notes, spice and cakey sweetness joining wine-like juicy plum, apricot and a tart finish.

*Somewhat alarmingly, the first site I found when I googled that flower featured this headline.