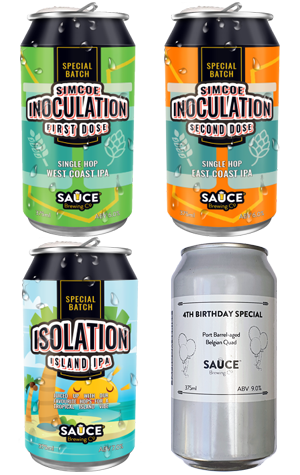 Simcoe Inoculation First Dose & Simcoe Inoculation Second Dose. I’m not sure punters would have known what to think of these beer names just a year or two ago – they’re very much of our time. And the beers are equally of our time; while they’re single-hopped with Simcoe, which has been around since the turn of the millennium, they’re playing in a very up-to-date space.

Sauce are calling First Dose an old school West Coast IPA, and it bears plenty of true-to-style WC characteristics: a wonderfully bright appearance; a malt sweetness on the nose to hold up the piney aroma; a dryness in the mouth as the pine is matched with a little woodiness and citrus. But there’s a very modern drinkability to it that you wouldn’t find in a West Coast five years ago – a lighter body, and a bitterness that sits alongside the flavours rather than trampling over them.

Second Dose openly boasts all the hallmarks of an East Coast: hazy, juicy, soft mouthfeel, low bitterness. First sniff is a big whack of fruit salad, though it levels out in the mouth as the fruit is balanced by a touch of earthy pine – a fine display of how versatile a variety like Simcoe can be in the hands of a brewer who knows how to get the most out of it.

If timeliness isn’t the main factor you’re looking for in a beer, Isolation Island IPA is a chance to jump in the time machine and go back; not to the isolation of the past few months, but to the time we could travel to tropical islands with reckless abandon. (Or at least to Perth, which was the recipient of the first iteration of this beer in 2019.) Depending on your sensitivity to Sabro hops, this beer will offer up either an even balance of coconut and juicy pineapple (the latter courtesy of that lovely hop variety known as Bru-1), or a tidal wave of coconut with undertones of pineapple and other tropicals. Either way, it certainly earns its moniker as an island IPA.

Want to wind back the clock even further? Fine. Back in the time machine, this time to lean on the lever and accidentally go back a couple of hundred years. While you’re stuck in the past, waiting for the right mechanical parts to be invented so you can fix your inexplicably broken vehicle, you might as well enjoy a fine Port Barrel-Aged Belgian Quad. Sauce pulled this beauty out of the barrel to celebrate their fourth birthday,† and those Belgian-Quad-swilling folk of yesteryear are still talking about the decadent dark chocolate, the leather-like liquorice, the cherry cola,†† and their amazement at how this high alcohol beer finishes so smooth and sweet with almost no alcohol heat.

†What’s that, you say? I’m being unnecessarily confusing and inconsistent with my imagined timelines? Perhaps I’m still concussed from the beating I received from a raiding party of Morlocks.†††
††Before you tell me I’m being ridiculously anachronistic, just assume I went back further into the past at some point and made small changes and the butterfly effect resulted in cherry cola being invented centuries earlier. †††Wait, Morlocks are from the future, not the past. Maybe it’s not a concussion. Maybe I’m just tired.