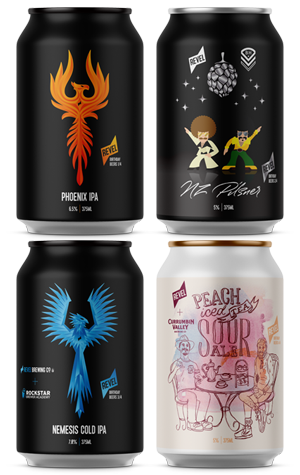 If ever a brewery deserved to do some celebrating, it’s Revel. After a remarkable year that's seen them open a new brewery and taproom in a heritage listed site, win a champion beer trophy at the Indies and undergo a rebrand, they're capping it all off with four new beers for their fourth birthday. It’s exhausting enough just writing that sentence – imagine actually doing the work...

First cab off the ranks is the Phoenix IPA, which nods to the brewery’s ability to rise from, if not the literal charred remains of itself, then at least a string of major hurdles. There’s no shortage of fresh hop aroma here and it’s a lighter affair than Revel's core range IPA. Bitterness is balanced with a slight sweetness, making for a highly drinkable number.

Next up, they teamed up with Black Hops to brew an NZ Pilsner which fittingly celebrates a trip both teams took together across The Ditch. Loaded with New Zealand hops, this beer is all lime and candied orange with a little spiciness too. Golden and clear in the glass, it’s crisp and lean with a refreshing bitterness.

Seamlessly transitioning from one style to the next, the team dipped their toes in the world of cold IPAs with their Nemesis Cold IPA. Brewed in collaboration with Rockstar Brewer, like the pilsener above it’s a clean and mostly dry beer. It’s also generously hopped, bursts with tropical fruit, yet has roundedness which makes it feel exceptionally balanced.

And, finally, we have the Peach Iced Tea Sour Ale brewed with Currumbin Valley, who are of course no strangers to nailing the style. The beer tastes and smells – as intended – like jammy peaches with a slight earthiness and astringency from the tea. As much a sticky, alcoholic nectar as a beer, it’s the icing on the metaphorical birthday cake.