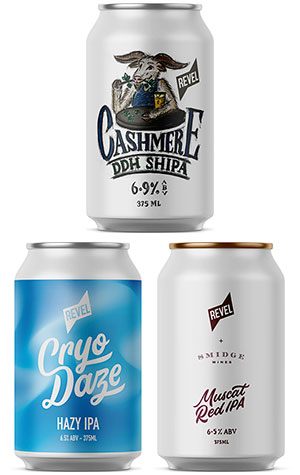 It’s been just over a year since Revel Brewing opened their second venue at Rivermakers, and with their limited releases coming out at a rate of knots they’ve been making very good use of all their extra brewing capacity. Case in point: no less than three IPA variants released in the first half of spring.

Cashmere is a double dry-hopped single hop IPA that doubles down on, you guessed it, Cashmere hops from the US. There's a solid bitterness alongside notes of coconut and citrus that punch through a background of subtle spiciness. Stripped back maltiness leaves the hop in the spotlight, eclipsed only by the extremely cool artwork of a goat on the label.

Next up is Cryo Daze, a hazy IPA brewed with a truckload of Cryo hops from Yakima Chief. The results a big fruit salad of a beer with really prominent notes of citrus, passionfruit and some spice too. There’s a touch of resin here but the bitterness is restrained, and the body is soft and pillowy.

Last of the trio is their Muscat Red IPA, brewed in collaboration with Smidge Wines, and representing a marked departure from the other two. Essentially, what you have here is a red IPA brewed with late harvest muscat juice from the winemaker’s McLaren Vale vineyard; the resultant beer is interesting, complex and straddles the wine/beer divide. Gripping astringency from the tannins and a soft acidity from the juice play out nicely against a subtly sweet malt backbone. There are some pops of soft stonefruit too in a lustrously ruby red pour.