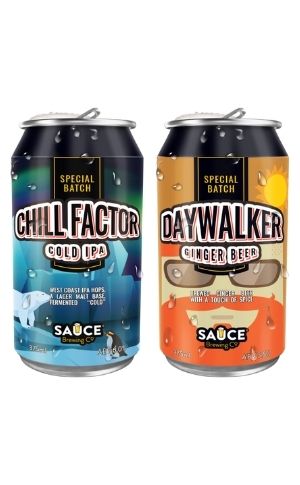 Is anyone else disappointed that when Sauce brought out their take on a cold IPA they didn’t call it Cold Sauce? Just me? Well then, I’ll put my disappointment on ice and turn your attention to Chill Factor.

The grain bill, yeast strain and fermenting temperature say "lager", but the hopping regime says "big old IPA". The body is crisp without being thin, with a clean malt base that’s all about paving the way for the hops to shine. Idaho 7 and Citra appear from the first sniff, but it’s on the palate where they really punch through, exhibiting their citrusy notes with a clean, piney bitterness. This is one of those a-little-too-easy-to-drink beers; it bears bold flavours and solid ABV, but it’s the kind of beer you want to drink by the pint.

Then there’s Daywalker, the first ginger beer to come through Sauce’s brewhouse. Sauce have included barley in the recipe to put the "beer" in "ginger beer", and also added chilli, cinnamon and clove to give Daywalker layers of complexity. It’s dry and spicy, almost like a hearty shiraz that can hold its own alongside just about any food you’d care to pair with it. There’s freshness from the moment it touches your lips, and lingering warmth on your tongue well after the last sip. Drink it with some Vietnamese or Thai food and you’re laughing.