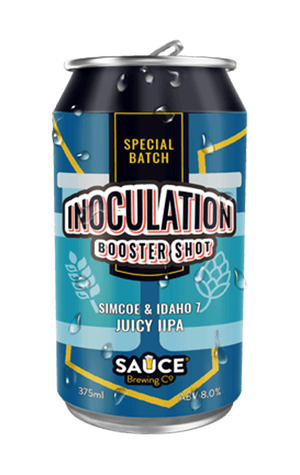 Pouring a rich and cloudy shade of burnt gold, a cautious sniff smells sweet and musky, like canteen lollies when you were a kid. An uncautious sniff hits you with memories of an early twenties night out, where opting for vodka led to you bingeing on the aforementioned nostalgic lollies because you’re a grown up now.

Expect a sweet and spicy first sip setting off a wave of flavours rolling and shifting through across your tongue like the doppler effect. The 8 percent alcohol is shy but finds its voice the more you sip, eventually nestling into your inner cheeks and gums like an IIPA from Sauce is legally required to.

The tin promises: “It’s bound to be more enjoyable than that other booster”, and after cracking mine I can tell you it definitely is. It's a real sipper, made for chilled evenings and a great answer to: "I'm just having one." Protecting yourself and your community has never tasted so good.

PS I know it’s not necessary for me to give food pairings but this beer would really do the trick next to some crunchy fried chicken bursting with its own oily, sinful juice.