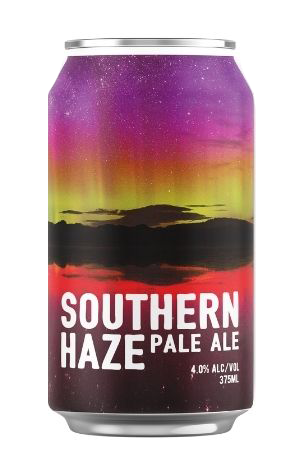 When I was a kid I was super interested in the phenomenon of Aurora Borealis, or the Northern Lights, but viewing them always felt a bit out of reach; Norway or Canada may as well have been far away as the moon. It wasn’t until I was an adult that I learned of the existence of Aurora Australis – although I’ve now been to Tasmania twice and haven’t made a trip up Mount Wellington at the right time to catch the Southern Lights.† For now, the vivid label of Southern Haze can be my opportunity to stop and recapture my sense of wonder.

The cloudy yellow of this beer may not quite be the hauntingly beautiful display of charged particles in the magnetospheric plasma,†† but it does promise the lightness of very pale malt. The flavours are buoyant, with lifted citrus and stonefruit notes high on the palate moving into a touch of acidic orange juice. Overall, it has a clean and refreshing nature uncommon to hazies, almost like a sessionable bright IPL.

Since it’s made with all Aussie malts and hops, perhaps we should be calling a four-pack of this beer the Southern Lights.

† Though I did get to see the Disappearing Tarn when I last visited Mount Wellington, which was lovely.

†† I won’t waste words explaining to you what charged particles in the magnetospheric plasma are, because I absolutely don’t know. But that fancy haze of colours in the sky sure looks purdy and magical.