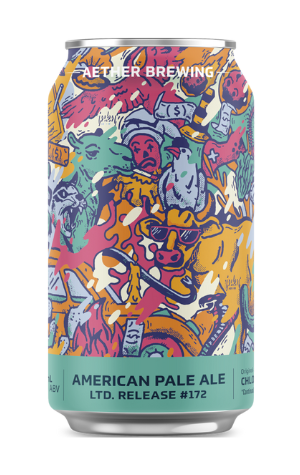 It’s always nice to try a new take on an existing style; this one deftly dodged my expectations. If the brewers had only added hop varieties Cascade, Centennial and Simcoe, my expectations would have been more or less spot on. But they stacked on Loral, Zappa and Trident as well, and this extended cast introduced all kinds of new elements.

I hear "American pale ale" and think "tastes like the early 2010s", but this limited release from Aether does not. In fact, it’s hard to put your finger on what it does taste like, since there’s quite a bit going on. There’s citrus and pine and a nice malt body, so it’s not like this is entirely foreign for an APA. There’s a touch of biscuity sweetness and a waft of floral notes that has it smelling like you’re walking past a fence covered in honeysuckle. And the finish lays out a dry bitterness and a lasting spicy resin that balances out any of those sweeter notes.

Meanwhile the artwork is kind of bonkers so I suppose I was warned there’d be a lot going on here.