Location’s one of them, for sure. And, in the case of Aether Brewing, it’s fair to say they hit the spot marked X. The founders somehow managed to snag a spot directly next to Milton train station, within a trendy dining precinct, in the shadow of new residential buildings and within spitting distance of Park Road, everyone’s favourite faux-Euro strip.

It’s also close to Suncorp Stadium, thus inundated every time there’s a major event there, and shares turf with The Scratch, Newstead Brewing, Brewski and Fritzenberger, making for a mean bar crawl that’ll have you sampling some of Brisbane’s finest liquid gold. And, speaking of gold, it breathes the same air as the Castlemaine Perkins Brewery, whose flashing red XXXX stands as a monument to Queensland’s love of beer.

But a stellar location is hardly the main factor in assessing a brewpub; Won’t somebody please think of the beer?

Thankfully, the Aether crew has thought of the beer, with a rock solid core range that moves from the obligatory mid-strength through various hop forward styles to the rum-soaked vanilla featuring Event Horizon Porter and has amassed a handy collection of Craft Beer Awards medals to boot.

Then, in a kind of extended-core-range, they have the likes of the Boos ESB, Pitchfork Saison, Black As Your Heart Black IPA and an alcoholic ginger beer with chilli and lime.

Aether was overwhelmed by the huge demand for its beer from the day they opened, so they had to think on their feet fast. The outcome saw them brew a chunk of their core range beers at a friend’s brewery in Maleny, before opting to build a production facility of their own in Northgate.

Since doing so, the brewery' founders decided they wanted to take different paths through the beer world, with Dave Ward and wife Annie taking the Aether business to the Northgate site and Dave's co-founder Jimmy Young staying at the Milton brewpub, relaunching it as Milton Common.

As for the naming of the operation they launched together...

“In Greek mythology, Aether is the fifth element, which holds the universe together,” says Dave. “Obviously… that’s beer.” I’ve only played Dungeons & Dragons once; it’s all fun and games until you’re reckless and don’t listen properly and your character dies early on in the game. But I’ve seen enough memes to know that “Chaotic Good” is a reference to the D&D Alignment Chart, which maps out characters according to their morals and worldview. Chaotic Good are happy to break the rules and do things their own way, but are ultimately good-hearted folk. Think Michael Scott from the Office, or Marvel’s… Read more
Pale Yellow Fact #1: It’s a very Australian thing to be self-deprecating and poke fun at your own achievements as much as you’d ever criticise anyone else’s. In line with this, there’s a trend among Australian craft brewers to be self-deprecating about their own beers. Fact #2: While a number of brewers take pride in the amount of flavour they’re able to get into their mid-strength beers, a fair portion of the craft beer community will mumble that mid-strength beers are lame. Fact #3: It’s common… Read more
Pale Yellow A pale ale in a brewery is like the comic relief character in a movie – not the reason you came in the first place, but might easily become your favourite part. Pit Stop is a little cloudy in appearance, but clean drinking from beginning to end. There’s a subtle malt background, but the New World hops (Galaxy, Azacca, and Mosaic) do the lion’s share of the work, bringing a whack of tropical fruit and citrus to the aroma and flavour. A solid bitterness rounds it out, ensuring you’re not left… Read more
Golden Despite all the attention hop-forward beers have received in the past decade, there are still many beer lovers who’ll declare their love of a good pilsner above all else (usually accompanied by a string of stories about the time they went to Germany or passed through the Czech Republic). This Old World Pilsner is a light straw colour with grassy aromas. It’s full of refreshing flavours: a touch of sweet malt and citrus zest, followed by the earthiness brought by a good balance of Czech Saaz… Read more
Pale Yellow This beer’s name brings together the Ancient Greece/fantasy theme of some of Aether’s beers and the astronomical theme (see Event Horizon). It seems to be referring to a huge dying star, but the picture on the label appears to be a dragon’s eye. (Just Google "Aether red giant" and "Smaug eye" and you’ll see the similarity.) Either way, this beer is clearly in powerful company. Perhaps the Magnum and Mosaic hops are leathery wings, beating down as the dragon breathes out… Read more
Red Of Aether’s core range beers, this is the one that’s received the most attention. In the current beer climate, an Australian brewery always tends to be judged on its pale ale and IPA, and this IPA has not been found wanting – it brought home a silver award from the Craft Beer Awards in 2017 and is the favourite beer of regulars at Aether’s brewpub in Milton. It’s a West Coast style IPA, juggling stone fruit and citrus flavours with resinous hop characters. The rich, almost creamy mouthfeel… Read more
Golden If you ever get the opportunity to head into space and look into a black hole (that’s the dream, right?), you won’t actually see anything. That’s because nothing – not even light – can escape it. That phenomenon is known as an event horizon and is discussed at great lengths by physicists and sci-fi lovers alike. So it feels like a huge call to name a dark beer Event Horizon; if the physicists and sci-fi geeks were to inspect it, they’d probably have a lot of scoffing to do. Luckily, most… Read more
Black We’ve seen a few peanut butter dessert beers in recent times, and often they’re sticky and syrupy, and fattened with lactose. If you’ve a sweet tooth, they may be just the thing you’re looking for. But what if you want the peanuts, you want the chocolate, you want the thick mouthfeel… but you want to ease off the sweetness? This is where Creature of the Night comes in. It’s thick - the dark head rises in slow motion, because even air struggles to wend its way through the viscous body.… Read more
Dark Brown There’s a skill in blending sours to achieve a rich complexity of flavours, and there’s a skill in achieving complexity without blending. Here, Aether has nailed the latter with a beer-wine hybrid that holds layers and layers. Dryad began with a malt bill made up of half Golden Promise and half Australian wheat, then was spontaneously soured with 1,000 litres of freshly picked and pressed pét-nat riesling juice from Latta Vino in Victoria. While it didn’t spend any time in barrels, the dark… Read more
Rich Brown

Aether brought out an earlier version of Roughneck at the start of 2018 as a maltier and floral counterpart to their core range Pit Stop Pale Ale. Now it’s back with a vengeance: with the alcohol content upped to 5.8 percent ABV and the tag "strong pale ale"; they've put it into tinnies too. This isn’t a beer to add to the many bright, tropical pale ales around at the moment. Instead, it carries almost amber ale characteristics (though it’s still the shining gold of a pale ale), with… Read more
Golden When it comes to special releases from Aether, the phrase: "Expect the unexpected" comes to mind. In the past, they’ve served up a smoked cherry double choc brownie stout, a Tom Yum gose, and even a bone marrow double Irish red ale to keep us on our toes. So, when it came time to christen their new brewhouse in Nundah, it’s no surprise their first brew was something experimental. But, if you think you can predict what the first sip of a sour boysenberry double IPA will taste like, you’re… Read more
Red Over the years, many IPAs have been described as "dank", "resinous", "sticky", 'weedy' and plenty of other marijuana-related terms. Hop cones look a little bit like buds and hop leaves can look similar to pot leaves if you squint hard enough. And, since researchers have discovered that hops and marijuana are both in the cannabaceae family, this isn’t really surprising. They’re cousins. The fact they share some traits makes a lot of sense. But sometimes you need to… Read more
Golden Australia saw a lot of New England style IPAs release in 2017, with 90 percent seemingly using the words "juice" or "crazy lazy hazy Swayze" in the title. It makes sense, given NEIPAs are known for their juiciness and for looking like a hazy glass of orange juice. But, when ten Brisbane breweries join together to brew such a beer, they can be expected to bend the rules. Thus it was that members of White Lies, Slipstream, Semi Pro, Helios, Revel, Newstead, Brisbane Brewing Co,… Read more
Golden Most beers are good to drink in summer… but some beers were born for it. Witching Hour Blackberry Sour (an occult-ish name softened by a delightful rhyme) is Aether Brewing’s summer seasonal release, and it’s a beer that grabs you right from the moment you see the impressive gothic artwork on the decal or can. The pour isn’t the dark purple of the fresh Queensland blackberry puree that was added to the brew. Instead, the combination of the blackberries and the classic light gold of the Berliner… Read more
Pale Yellow 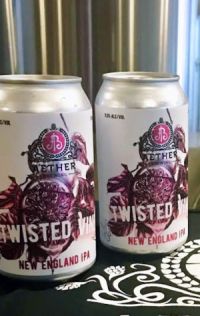 How do you make a fruity New England style IPA even more fruity? Add fruit, of course. At least, that's where a couple of years of experimentation led Aether's Dave and Jimmy. Twisted Vine has had both fresh passionfruit and blood orange added to its hazy mix and is also the first Aether beer chosen to appear inside a can. They reckon it's a beer that "embodies the fresh, bright boldness of a Queensland spring bursting with life" and is one that received an "overwhelming" when… Read more
Golden You don’t have to spend long around Jimmy Young of Aether Brewing to hear him utter the word, “BOOS!” It’s one of those exclamations (is it a word? is it a sound effect?) that’s hard to define, but usually makes sense in context. It’s an apt name for this English style bitter, which always makes a whole lot of sense when you’re knocking it back, whatever the context. The two row base malt does all the heavy lifting, bringing the smooth caramel and toffee flavours you’d expect from… Read more
Rich Brown Picture this: You’re a Belgian farm owner in the 1700s. You need a lot of harvesting and other various work done in your fields, but you don’t have a lot of drinking water to offer the seasonal workers (saisonniers) you’ve hired. What do you give them to drink? You've guessed it: you let the saison flow freely. It’s a good thing saisons aren’t just for farm labourers anymore, because most of us are more experienced with a cake fork than a pitchfork. But this Pitch Fork is accessible to… Read more
Pale Yellow 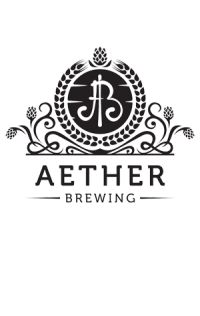 There’s plenty of talk about the absurdity of the name, Black India Pale Ale. How can it be black and pale at the same time? This same confusion sometimes translates to the experience of drinking a black IPA, when the flavours can clash and vie for centre stage. But something intriguing takes place when you drink this brew. The fruitiness of the hops and the roastiness of the malts seem comfortable side by side. This hybrid beverage enters your lips as a tropical IPA, but slides down your throat… Read more
Dark Brown