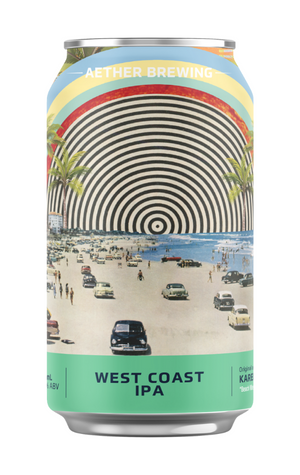 From the time they opened, Aether Brewing’s core range IPA has always been one of their most popular beers. When the brewery’s rebrand in 2022 saw them review some of their regular beers, the brewers decided to tweak the recipe of Hop Skip & Jump (the previous name for this IPA). The ABV dropped (from 6.4 percent ABV to 6.0), the flavour remained, and the drinkability increased.

Now simply labelled West Coast IPA, this beer has an aroma that suggests sweet malty toffee while the taste is all about the hops: dry pine, bitey grapefruit peel and bitter resin. But don’t be too quick to judge this beer; while these kinds of flavours can give the impression you’re about to get a thump on the skull, this beer is friendly rather than aggressive. Just because the big bald guy in the leather jacket has a long beard and full sleeve tats doesn’t mean he’s dangerous; get into a conversation with the guy and you’ll find out he runs a book club and volunteers at the local kitten cafe.