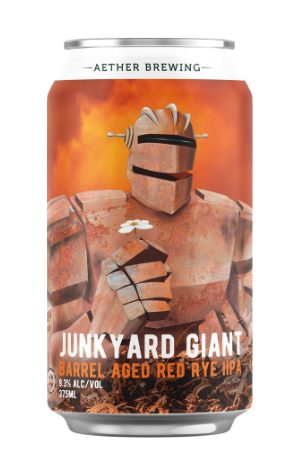 What is going on here?? Aether are calling this a red rye IIPA… but in reality it’s something much more complex than that, on both the production front and the tasting front. (Props to the label designer, because the illustration of a giant robot constructed from all different parts captures this beer excellently.)

On the production side, this beer began life more than a year ago when Aether brewed a barleywine and stuck it into French oak barrels. Then, six months later, the brewers made a rye ale and put it into American oak barrels. Fast forward to the present, when experimental blending produced a tasty crossbreed of these two beers. But even that boozy beauty wasn’t good enough for Aether – the beer went through a round of dry-hopping as well.

Which brings us to the beer in front of us: Junkyard Giant, the supposed red rye IIPA. But while I can have a crack at describing what this beer is like, I’m going to throw styles out the window for a moment, because, well, this beer defies them.

Like any respectable robot made from scrap metal, Junkyard Giant is the colour of rust: a lighter, burnt orange rust rather than an old brown. It oozes with a mix of aromas including prunes in golden syrup, sharp orange rind, a slight funky note, and fruity hops poking at the edge of consciousness from all sides. Then even more bits and pieces show up once you start drinking: a thick wash over the tongue; a huge hoppiness that floods in; an edge of sourness that at least one of the liquids picked up from its time on oak; an aftertaste of bitterness that surprised me after the sweetness of the rich malts. And while I was keeping an eye out for the layered grain bill, the seven hops, the effect of the barrels, and the rye spiciness… I realised the booziness slipped straight past my defences.

TL;DR – Incredibly complex. This is one you have to taste for yourself.