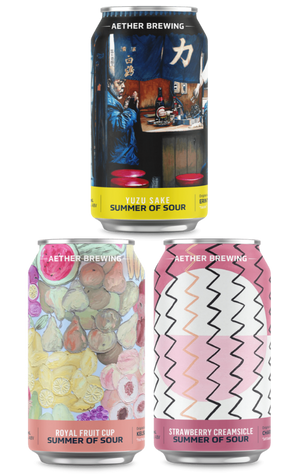 Aether are well aware that in Brisbane summer arrives long before the calendar says it does (we had a 34 degree day in October), so they’ve got their Summer of Sours beers out well in advance of December.

The first of this trio is Yuzu Sake. It’s a light and cloudy colour I was going to describe as "lemon yellow", but I guess "yuzu yellow" would be apt. The liquid gives off the floaty smell of lemon sherbet or lemon sorbet, but once it hits your mouth there’s a jolt of sour that makes a beeline for your jaw. The intensity backs off almost instantly, though, as the flavour of citrus eases its way across the tastebuds, balanced by the flavour of sake (with no context I would have called it a white wine flavour).

If this sounds like a lot, don’t be put off: it’s certainly all softer than I expected. Like I expected a spotlight to shine in my eyes, but drizzling rain has turned the spotlight’s beam into a haloed glow.

Look at the list of ingredients and Royal Fruit Cup also sounds like it could be overwhelming: “a sour ginger beer base with a selection of herbs and spices, along with fresh cucumber, zesty orange, sweet strawberry and hints of champagne”. Kind of sounds like a Vietnamese salad crossed with a Mother’s Day brunch.

But again, trust the nuanced work of the brewers on this one. It’s supposed to taste like a Pimm’s No. 1 Cup, but since I’ve never had a Pimm’s Cup (am I in the minority here?) it’s hard to say how close it is to the mark. But what I can say is that it’s absolutely delightful, like a fresh and fruity bowl of punch. The strawberry brings the impression of slushy sweetness without actually being too sweet or thick, and the cucumber does its job of bringing a refreshing lightness to the taste.

I want to put this in a tall glass. I want lots of ice in it, and a garnish of strawberries and cucumber and mint. I want to wear a large fascinator on my head and lounge around in the sun while people play croquet.

After the lighter tasting and lower alcohol sours, the Strawberry Creamsicle* takes more of a desserty approach. Fresh Tassie strawberries, French vanilla and lactose join forces to give you a faceful of strawberry marshmallow aroma – put this on the end of a stick and toast it over a fire. But even though the bigger malt bill and the lactose bring a balancing sweetness, this one’s the sourest of the three. Think sour strawberries with dollops of sweet cream.

*Strawberry creamsicles are an American thing; I reckon the equivalent for Queenslanders would be an Ekka strawberry sundae.

If you need more fruit in your life, Aether have also added two hard seltzers to their core range, which you can read about here.