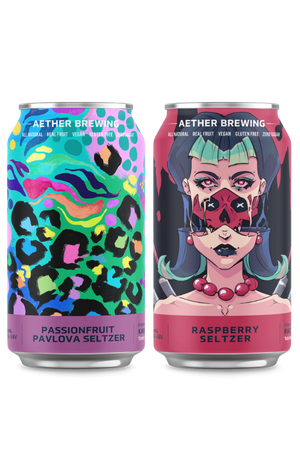 Many hard seltzers out there look like soda water and taste very close to it (with just a tiny hint of flavour). Not Aether’s seltzers.

The Passionfruit Pavlova Seltzer has a yellowish, almost yellowish-green tinge to it, and it does indeed hit you as creamy pavlova. I don’t know how much vanilla and real passionfruit they used to nail this, but it certainly has more going on than many seltzers I’ve tasted.

The Raspberry Seltzer is kind of gruesome. There’s a horrific woman on the label whose head’s split in half to reveal a red skull, and there are chef’s knives sticking out of her. And the drink itself is almost blood red with pink foam. WHO DIED TO MAKE THIS SELTZER?!

OK, after its terrifying first impression faded, this seltzer kind of looks like raspberry Fanta more than it does blood, and it has plenty of flavour, tasting kind of like red Fanta without the sugar. So it’s not too scary after all. But maybe still don't take your eyes off this murder drink.

Note: there may be other hard seltzers released by Aether, but we won't be writing about them. We're happy to let readers know which breweries are playing in this space, but we're a beer website and need to focus our attention on the diverse array of beers being released.

NB If you're reading this in time, we're giving away two cases of each of Aether's new-look core range to members of our beer club, The Crafty Cabal.