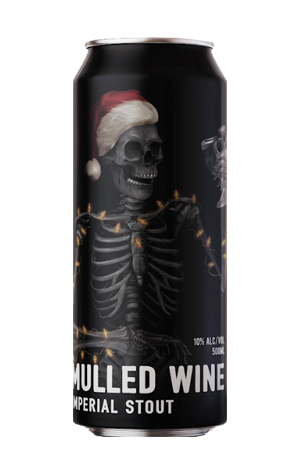 When My Beer Dealer sold their "12 Imperial Stouts of Christmas" boxes in December, one of the offerings was a Mulled Wine Imperial Stout from Aether. But, alas, it was exclusive to those boxes, which were snapped up quicker than the cashews in a bowl of mixed nuts. And so, sympathetic to the plight of those who missed out, Aether’s brewed another batch - just in time for everyone’s Christmas in July parties (whether dinner parties or sitting-on-the-couch-eating-leftovers parties).

For many of us, an imperial stout with shiraz grape pressings, orange peel, cinnamon, cloves and star anise is just the thing on a cold winter’s night. Because yes, this time, we get to enjoy it in winter, as mulled wine was intended. Who drinks mulled wine in summer? Barbarians, that’s who.

It looks like any other luscious imperial stout, pouring black with a thick and foamy head the colour of a latte. But from the first sniff you know there’s more going on here - this stout smells of cola and spicy sarsaparilla and whisky and spiced rum all at once, with a deep roastiness weaving its way between the other aromas.

The full-bodied liquid that rolls onto the tongue feels like it should be sweet, but it’s quite dry. Roast and coffee and spices intermingle with a bitterness that’s clear, but not confronting; bold in kind, but soft in degree. The shiraz notes are subtle, waiting until the aftertaste to show themselves. After drinking half of this beer at normal imperial stout temperature, I had the clever idea of heating up the rest of it on the stove and drinking it hot - after all, that’s what you do with mulled wine. So I poured some into a saucepan, fired up the gas, and watch as it began to bubble. The head retention was impressive (it held thick and foamy across an eight-inch diameter!) and lovely orange and alcohol aromas filled the air. But ultimately my clever idea turned out to be a bad one. As amazing as it smelled while heating, the beer got weirdly thick and ended up tasted somehow savoury. Ah well. Nothing ventured, nothing gained, right?

Learn from my mistake and enjoy yours at a normal temperature.