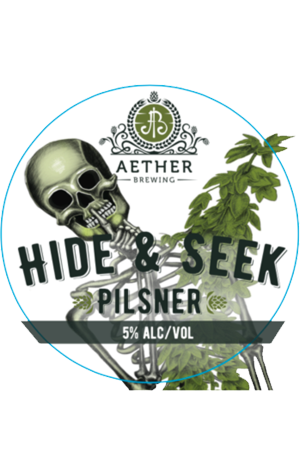 Despite all the attention hop-forward beers have received in the past decade, there are still many beer lovers who’ll declare their love of a good pilsner above all else (usually accompanied by a string of stories about the time they went to Germany or passed through the Czech Republic).

This Old World Pilsner is a light straw colour with grassy aromas. It’s full of refreshing flavours: a touch of sweet malt and citrus zest, followed by the earthiness brought by a good balance of Czech Saaz hops. A crisp, clean finish sets you up to say: “Another?” as soon as the last sip has passed your lips.

At the CBIA Craft Beer Awards 2017, Hide & Seek picked up a bronze award in the Lager category. Dave Ward’s wife Annie claims: “I could drink it all day (and have been known to).” But it’s also the kind of beer you could use as a clean break between other, bigger-flavoured beers. Or, if you get your hands on some brewery fresh cans, it could even be your mowing-the-lawn beer – both because it’s the right amount of light refreshment for such a task, and also because it oozes with that freshly cut grass aroma.