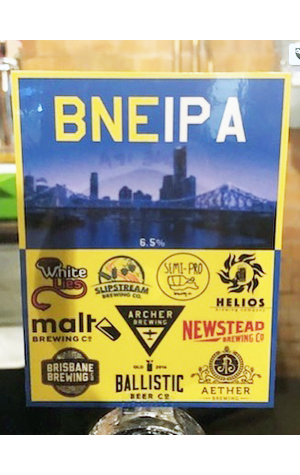 Australia saw a lot of New England style IPAs release in 2017, with 90 percent seemingly using the words "juice" or "crazy lazy hazy Swayze" in the title. It makes sense, given NEIPAs are known for their juiciness and for looking like a hazy glass of orange juice. But, when ten Brisbane breweries join together to brew such a beer, they can be expected to bend the rules.

Thus it was that members of White Lies, Slipstream, Semi Pro, Helios, Revel, Newstead, Brisbane Brewing Co, Ballistic and Aether gathered at Archer Brewing’s headquarters to create a NEIPA with all the hops, but none of the haze. They called it a Bright New England IPA, or BNEIPA. And, since BNE is the abbreviation for Brisbane, as well as the airport code for Brisbane Airport (very on-brand for Archer Brewing), you just know they’re still patting themselves on the back for coming up with the name.

The inclusion of 25 percent wheat malt and 12 percent raw oats means that this beer has the full body of a NEIPA. There’s the slightest bitterness from the cooled whirlpool addition, but the real hop presence is from the ten consecutive days of dry hopping – one day for each brewer. After settling post-fermentation, the beer was was coarse-filtered through a five micron filter (aka small), which brought its clarity close to that of a pilsner.

All this means there’s an awful lot more hoppiness than meets the eye. If you raise a BNEIPA towards your lips expecting mild-flavoured beer, you’ll get quite the surprise; what hits your nose is the sweet scent of farmers’ markets in the Brisbane sun, while the taste is a smooth mouthful of fruit salad. The masses of hops (Astra, Galaxy, Topaz and Vic Secret) lend it plenty of peach and lychee and passionfruit and pineapple, and a whole lot of easy drinkin’ too. Perfect for a sticky Brisbane afternoon.

The haze days are far from over. But one thing’s clear: the BNEIPA.