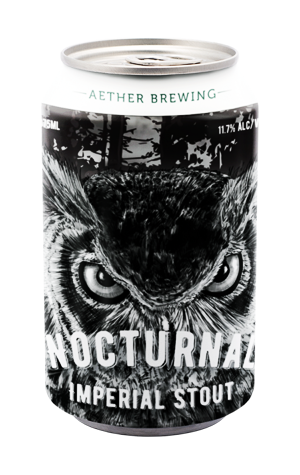 In a piece of exquisite team management I managed to receive two separate write-ups for the same beer in my inbox within an hour or two of each other on Friday. So, given it's a whopper of a beer, why not run them both side by side?

Though I don’t usually drink sugar in my coffee, when I decided to try drinking espresso for the first time, I was determined to do it "the Italian way". It’s fairly standard for Italians to stir a teaspoon or two of sugar into their tiny cup before shooting their coffee down. If you’ve never done it before, it’s quite an experience - like a defibrillator in beverage form. The strong bitter bite and the short sharp sweetness combine to give you a delicious jolt.

Aether’s Nocturnal imperial stout delivers a similar inviting intensity. A waft off the top of the chocolate-brown froth presents you with the roasty bitterness and treacly sweetness of coffee liqueur. As soon as it passes over your lips, it sits sweet and slick on the tongue, like the oily crema sprawled across the surface of a short black. The Canadian maple syrup Aether added to the brew doesn’t take over, but rather provides a sweetness and complexity that amplifies all the other flavours. When I drank it, I was taken to the richness and acidity of sugary espresso that's cooled down, potent as Vespa fuel and twice as zippy. A buddy of mine described it as a chocolate ice cream affogato with a shot of whisky.

There’s an old proverb†: coffee should be black as hell, strong as death, and sweet as love. That’s not a half bad description of this beer, either.

†The proverb is Turkish, not Italian like my other coffee comparisons, but I’ll happily appropriate it for the purpose of describing this beer.

Amidst the chaos, winter descends as it always does, bringing the cold and early nights. Woodpiles get stocked for the fireplaces, salads are swapped for soups, pale ales become dark. Winter has come and it’s stout season once again. What better way to embrace it than putting your woollen mitts around the newest release from Aether, the Nocturnal Imperial Stout.

Boasting a jet-black body and brown head that is neither billowing nor rapidly dissipating, it lingers over time. The low carbonation accentuates the smoothness and allows the aroma and flavour to warm the senses. The mouthfeel is thick and you will run the gauntlet of flavour from dried dates and coffee to sweet chocolate and maple syrup. High on the ABV at 11.7, but balanced and warming to the soul.

If you can resist, let this sit for a while and it will be worth the wait. Settle in for the long dark night.

From the Aether taproom, online and reputable stockists around Queensland