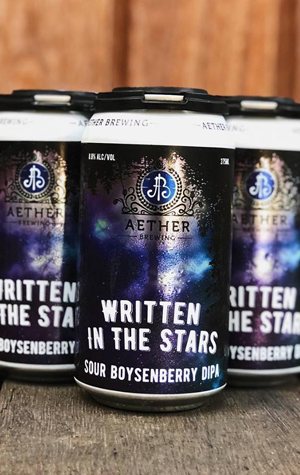 When it comes to special releases from Aether, the phrase: "Expect the unexpected" comes to mind. In the past, they’ve served up a smoked cherry double choc brownie stout, a Tom Yum gose, and even a bone marrow double Irish red ale to keep us on our toes. So, when it came time to christen their new brewhouse in Nundah, it’s no surprise their first brew was something experimental. But, if you think you can predict what the first sip of a sour boysenberry double IPA will taste like, you’re wrong.

As the (new/hybrid/made up) style suggests, there is a LOT going on in this beer. It pours an insane colour that no one can agree on. (Is it purple? Ruby? Garnet?). Even the head takes on a rosy, purple-ish tinge. The aroma is all sweet berries, but the immediate taste is tart, with what's almost a sharpness carrying the powerful berry flavour. The berries are bold from the get go, but their character keeps morphing as you work your way through the drink. At times sour; at times sweet; at times bitter. Once the initial shock of the berries has worn off, characters of pine and citrus reveal themselves, along with a lingering hop bitterness. For all its rich and complex flavour, Written in the Stars manages to hide the alcohol surprisingly well.

Like many experimental beers, it’s not for everyone, and some people find it too much. But if this sounds like the kind of beer you enjoy, you’ll be raving about it to everyone who’ll listen.