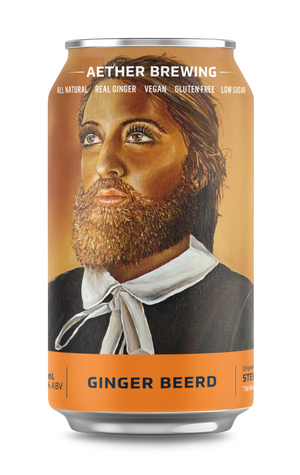 In days gone by, Aether’s Ginger Beerd was personified by a grizzled ship’s captain wearing a sailor’s cap, smoking a pipe, and sporting a tinge of ginge in his beard and eyebrows. Now that same facial hair is on the face of a woman dressed in 18th century garb; Steve Falco (the artist behind both the former and current design) describes her "beauty with a touch of roughness."

When you first look at a glass of Ginger Beerd, it looks a little blurry, and you wonder if your eyes are out of focus. But that haze is a testament to the use of real Queensland ginger – and plenty of it – which brings powerful flavour to this drink. It tastes dirty, in a good way. Heady spiciness, earthy ginger, and thick sweetness come together to make a drink that’s strong enough to hold up however you have it. At the brewery, they’ll serve it to you with a wedge of lime. But it’s also begging for you to experiment: add a dash of soda water for a lighter experience, or a tot of spiced rum for a heavier one. Or my personal favourite: pair with chilli basil stir fry from your favourite Thai place.

For those interested, Ginger Beerd is brewed with gluten free ingredients, with a sorghum and corn base.