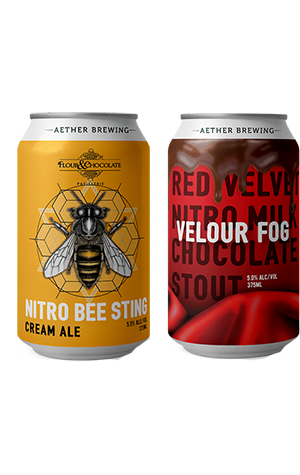 If you’re going to make pastry beers, why not team up with a patisserie? That’s what Aether’s done with their neighbours at Flour & Chocolate Northgate for the second time and the results speak for themselves.*

After a successful debut in 2020 and a flurry of customer requests, Nitro Bee Sting returns for 2021. Based on the sweet bun that share its name, Bee Sting is a flood of sweet and creamy goodness without the heaviness of many of the other pastry beers out there. The aroma is vanilla in its many forms - vanilla custard is obviously the aim but vanilla ice cream or vanilla malt milkshake would also be apt descriptors - and it joins seamlessly with nitro in the mouth to bring a decadent taste. While honey and almond are included as ingredients, don’t go hunting for them as separate flavours - their job is to make the overall flavour more complex rather than dominate, which they do alongside some dried apricot hop character.

And if you’re like me and always spill some on your hand when you pour a nitro beer, you’ll even end up having to lick your fingers clean, just like with a bee sting pastry.

If you think the name Velour Fog Red Velvet Nitro Milk Chocolate Stout is a mouthful, just wait until you take a sip. This second collaboration with Flour & Chocolate is based on a red velvet cake, and it brings layers of chocolate, raspberries and vanilla to bear on a thick dark beer base.

The fat and foamy head looks like the inside of a Milky Way bar and threatens to give you a froth moustache as soon as you raise the glass to your mouth. But this is an acceptable price to pay for the faceful of dark chocolate ganache it brings. In this rich environment, the raspberries almost come through with the oomph of dark cherries; this beer could just as easily have been named after a black forest cake. But when you’re enjoying this sweet chocolate with a hint of berry tartness, along with more and more vanilla buttercream as the beer climbs towards room temperature, you’re not really worrying about what cake you’re eating. You’re just looking for a cake fork.

*Though that’s never stopped me from spouting off lots of words. Writers gonna write.