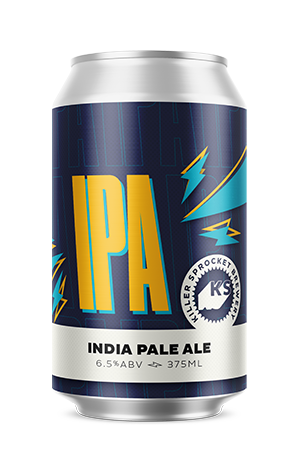 Killer Sprocket launched in 2013, and although the brewery of today is a little different, the Sprocket journey has been one of steady evolution over revolution. Having launched without a home, today Killer Sprocket have their own stainless and venue in Melbourne east and, while the team is a little bigger, founders Sean and Andrea Ryan are still very much the driving force.

The brewery’s core range IPA was introduced in 2022 and it's a sign of that change too. The can is the first to feature a new look for the brewery, while the beer itself is an IPA built upon Cascade and Mosaic hops. With classic West Coast elements of resin, pine and an earthiness at play, and an accompanying big bitterness, it's something of an old school release. But thanks to its hazy appearance and more juicy elements of orange and pineapple, it’s also not too far from a modern hazy either.

So while it might be a little different to the kind of IPAs Sean and Andrea first started brewing, it feels like an appropriate core range member for a brewery nearing the end of its first decade and looking towards the future.