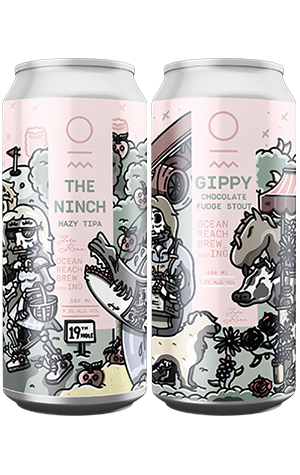 Ocean Reach’s Artist Series sees the Phillip Island brewery let different artists take control of how a beer releases will look, with these two the work of Jake Ross. Both beers in the series have been inspired by two parts of Victoria that hold a special place in Jake’s heart, The Ninch (Mornington Peninsula) and Gippy (Gippsland). Each release in the series comes in 500ml cans too which not only gives each artist quite a large canvas to showcase their talents but also means there’s more beer to enjoy. When it comes to the beers inside April’s Artist Series, you might be better off sharing them, with both quite big beasts. The Ninch is a hazy triple IPA filled with Citra Cryo and Amarillo hops and at 9.3 percent ABV, you might expect the alcohol to stand out or be particularly obvious but there are no harsh or hot hits of booze here. Instead, it's all about soft and juicy notes of sticky mango, sweet orange and pulpy passionfruit.

Gippy is somewhat smaller at 7.9 percent ABV but given it's a chocolate fudge stout, it’s safe to say it’s the kind of beer you should approach with a bit of restraint. The first thing to know about Gippy is that it’s really quite smooth and slick, which is a fitting way to be introduced to its rich and sweet chocolate notes. It’s not all rich edges though, with more roasted notes coming into play with a dry swirl and a somewhat herbally, tobacco-like finish.