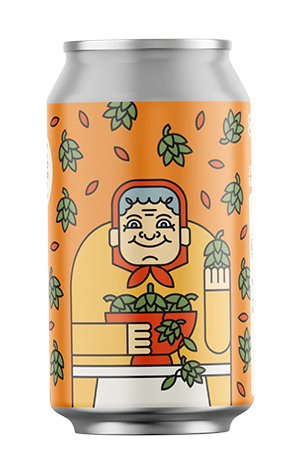 If you were a fan of CoConspirators Brewing during their early days - circa 2016/17 - and then missed the last few years of their releases, The Nonna might give you pause for thought. Weren’t these beers based around underworld figures? Is The Nonna hiding something quite dangerous in her bowl of hops? But don’t fret too much - the conspiracy is now much bigger and many of the CoConspirators’ aren’t as deadly as they once were. Indeed, the biggest danger brought by The Nonna is likely telling you that you haven’t quite eaten enough while forcing delicious charcuterie into your hands - hopefully, charcuterie sourced from the brewery’s neighbours and collaborators on this beer, Small Axe.

In keeping with the above hypothetical of somehow missing out on the last five or six years of craft beer, the beer style here would probably surprise you too. How many Australian breweries were making limited release pilsners in 2017 and was anyone making the more heavily-hopped Italian pilsners? But nobody should expect craft beer to stand still and change should be welcome, particularly when the light-bodied pilsner provides aromatic herbal, spiced and soft citrus notes thanks to the combination of Saaz, Hallertau Mittelfrüh and Northern Brewer hops. Alongside that Noble hop mix are elements of dry biscuit and bready malt which are soon washed away by quite a substantial bitterness. It all suggests that maybe The Nonna is right, you haven't quite had enough, go back for seconds.

If you're reading this in time, The Nonna is being launched at CoConspirators brewpub on May 20, with only a few tickets available at the time of writing. Head here to find out more or grab yours.