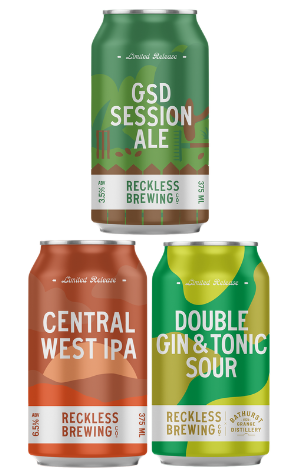 How thoughtful of Reckless to make a beer that’d help us get stuff done!

If you weren’t aware, GSD is a clever little play on GTD, the Getting Things Done personal productivity methodology (gosh, that’s a mouthful). I’m not sure if GSD actually helps you to be more productive, but, I mean… it’s worth a try, right?

This session ale is certainly putting in the effort: efficient use of malt gives it a nice biscuit character, it achieves plenty of orange sherbet aroma, there’s a proactive bitterness in there among the fruity notes from the hard-working Azacca and Mosaic, all while a decent body and lingering foam show that the Reckless brewing machine is well-oiled.

The label description of Central West IPA describes it as a "classically inspired West Coast IPA", but to me this beer drank like a quite modern interpretation of the style. Or perhaps even like a souped up XPA.

To start with, it was one of the palest IPAs I’ve seen: it shone bright and sparkled yellow, with a big, fluffy white head crowning the beer. From there, it gave off semi-sweet tropical fruits with a hint of melon while citrus coasted alongside some alcohol flavour. The body was slick and streamline, which made this go down far more quickly than I expected from a 6.5 percent ABV IPA. Oops.

For their Double Gin & Tonic Sour, the Reckless team collaborated with their neighbour Bathurst Grange Distillery (when you’re out in the Central West, 14km away counts as "next door") to get their hands on the botanicals used in Bathurst Grange’s Australian Gin. They took juniper, coriander, pink peppercorn, rosemary, lemon myrtle and orange peel – some of which are grown on the Bathurst Grange property – and used them as the flavour base for a refreshing sour.

The dense head gives off a range of complex herbal aromas, like it’s hiding a different botanical in every tiny bubble, though the juniper, lemon myrtle and coriander seed push to the front. My mind went to a fresh witbier, though it wasn’t allowed to stay there once I raised the glass to my lips. There’s a gentle tang with an even gentler sweetness for balance, giving the impression of Bickford’s lime cordial.

This beer is prime for sunny afternoons when the shadows are just beginning to stretch. I was going to say it would work well as a boilermaker, but actually I wonder if putting the gin actually in the beer would be even better.