When your brewery name is an adjective, you’ve got a question to answer: is it a fitting description of your brewery?

So: is Reckless Brewing as reckless as the name suggests?

The answer is yes… and no.

Yes, because it was started by three friends who threw caution to the wind and entered the highly-competitive brewing industry off the back of “We love beer!”…

…but they are well-equipped people who followed this up with considered decision-making. Within the team of three – Grace, Jarrod and Alice – they bring brewing expertise and business experience to bear, as well as a focus on consistency and quality.

There’s a mix of personalities in the crew, so the joyful abandon of one person is always balanced by the careful analysis of another. One makes a list and checks it off one item at a time, while another member charges ahead excitedly; someone dives in headfirst, but someone else has already done a depth check.

In their words: “Take a chance, be adventurous, but not stupid.” (Apparently, “Recklessness Within Reason Brewing Co” was already taken.)

So, what does this all mean for the beer?

Each beer begins life with Jarrod and Alice throwing out ideas like “Summer!” “Friendship!” “Rainbows!” and Grace, the head brewer, develops a recipe to match (and somehow captures these vibes perfectly). The aim is always to make flavoursome, hop-forward beers, but with a focus on being approachable and suited to the Aussie climate.

“Whatever we produce has to be easy to drink, no matter how complex,” Jarrod says. “There is a way to give people these flavours from the outset without being in your face.”

The Reckless crew have no interest in blending in; as a proudly female-led brewery in a male-dominated industry, they’re happy to stand out in the crowd. So, while their beers are easy-drinking, they refuse to make boring beers that don’t do the independent beer scene justice. They have a habit of dumping large amounts of hops into each brew late in the process, with the result of pumping out beers that positively sing with high aroma and low bitterness, setting them apart from many traditional “gateway” beers. The distinctive bright colours of their tinnies help them to stand out in the fridge, too.

As a brewing company which initially operated without its own home, the Reckless brand is all about the vibe of the people who make it and the people who drink it. It transcends place, and yet carries characteristics of where it comes from. It has the buzzing but effortless cool of Sydney’s Inner West, that global hotspot of independent brewing where Reckless was launched before moving to Bathurst, but also the relaxed nature of the small regional town where Jarrod and Grace lived at the time. (See these vibes come together in the videos they filmed during COVID lockdown, where they talk tasting notes and hop varieties in the middle of nowhere three hours from Sydney.)

Of course, you don’t need to know the story of Reckless to drink their beer. You might find the bold-coloured cans catching your eye. You might get a chance to taste one of their bold-flavoured beers. But, whether it’s the vibrance of the palette or the vibrance on the palate that draws you in, once Reckless grabs your attention it doesn’t let go.

And, as of September 2022, you can experience Reckless at their own brewery home in Bathurst. The site is a gorgeous heritage-listed flour mill, complete with rustic timber and a fireplace. Read all about that here and in this article all about head brewer Grace.

Reckless To Set Up Home In Bathurst

After a couple of years building a brand via the contract brewing route in Sydney’s Inner West, Reckless Brewing have found a home – in a heritage-listed flour mill in Bathurst that formerly housed Two Heads Brewing.

Reckless have brought local beer back to Bathurst and leading the way is co-founder Grace Fowler. We caught up with the longtime brewer to hear how she went from a "baptism of fire" to head brewer of her own operation. When the Reckless trio decided to add a stout to their line-up, they discovered they all had their own thoughts about how it should turn out. Co-founder Jarrod describes the process on the Reckless blog: “We describe to each other what we think a perfect stout is all about… I want it to have low bitterness and be hop-forward, Alice wants the beer to have some sweetness, without the addition of sugars. Grace has a certain hop variety that she thinks would balance delightfully on her roasted base.” That… Read more
Black This beer was first released as 'Summer IPA,' and for good reason - it carries as much summer as Endless Summer played on loop ad nauseum.† But this isn't a beer to limit to one season, so the Reckless team added it to their year-round roster so it can bring summer to you whenever you drink it. It smells like someone has opened a packet of Starburst Chews, unwrapped every individual lolly, and then thrown them all at your head. If you like the idea of drinking overripe stone fruit, juicy blueberries,… Read more
Golden This is the darling of the Reckless line-up - the beer that started it all. It took 18 trial brews over almost two years for the Reckless crew to get this beer to where it is today, but once they were there, they knew they’d hit on something special; their Pale Ale strikes that chord of approachability and complexity that they were after. Grace the head brewer built this beer upon three of her favourite hops - Simcoe, Galaxy, and Citra. From the instant this beer pours into the glass, big orange… Read more
Golden Yellow In March 2020, the Reckless crew were just about to brew a big batch of a sessionable beer when it became clear that Australia was about to go into lockdown. So at the last minute, they decided to change tack and go with a smaller batch of a bigger beer - thus the Red IPA was born almost by accident. And what a happy accident it is. While it’s heavy by Reckless standards, this beer is lighter than many red IPAs; it’s fresh and zippy rather than sticky or syrupy. Even the colour is quite light,… Read more
Red “It was meant to be one-off, but it was the nicest XPA I’ve had in my life. We found ourselves drinking it exclusively to the detriment of our bottom line…” - Grace, head brewer. The Reckless team upgraded this single malt and single hop XPA from a small batch to a regular when they realised they couldn’t stop drinking it and it's not surprising given it's the most refreshing in the Reckless range. It’s bright to the eyes, alluring to the nose and spritzy to the tongue, enlivening the… Read more
Pale Yellow How thoughtful of Reckless to make a beer that’d help us get stuff done! If you weren’t aware, GSD is a clever little play on GTD, the Getting Things Done personal productivity methodology (gosh, that’s a mouthful). I’m not sure if GSD actually helps you to be more productive, but, I mean… it’s worth a try, right? This session ale is certainly putting in the effort: efficient use of malt gives it a nice biscuit character, it achieves plenty of orange sherbet aroma, there’s a proactive… Read more
Golden Yellow 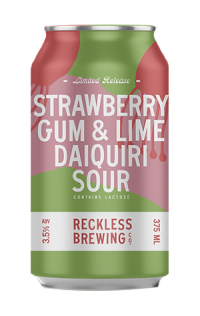 Reckless Brewing are one of many breweries in Australia who've decided to eschew coming up with a colourful name for each beer in favour of keeping things simple. When someone picks up one of their beers, they know what they're getting: Stout, Red IPA, Pale and so on. Presumably it saves time in the brewery too, at least compared with those who've decided every limited release needs its own name (a policy that, in part, led the larks at Little Bang down this path a couple of years ago). Of course,… Read more
Red 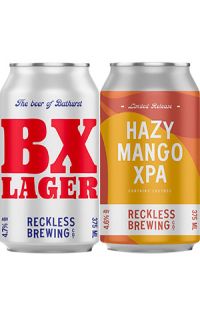 You'd think giving the people of Bathurst a brewery to call their own would be enough of a gift, but the kind-hearted souls at Reckless clearly decided they should lavish their new locals with a little more as soon as they'd thrown open the doors. Bearing the tagline "The beer of Bathurst" comes BX Lager, which feels very much like a softener to win over newcomers to their operation in a city best known for an event at which the craftiest thing you're likely to find is the Reckless sponsorship… Read more
Golden Yellow There's a couple of ways you can approach this collab by close brewing buddies Akasha and Reckless. On one level, it's an easy-going XPA that sits neatly in the middle of the range of XPAs released by Aussie brewers: delicate tropical aromas and the lightest of grain sweetness; good body for a beer of its size, with a rising citrus character on the palate. In short, well put together and sessionable. Rather louder than the liquid itself is the message – tied to the #breakthebias theme of International… Read more
Pale Yellow 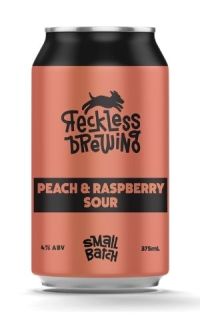 The look, the taste, and the feel of this beer make me want to pour it into a champagne glass and drink it at brunch, or while looking over the ocean while a rosy sunset reflects off the surface of the water. It’s the lovely blush colour of Allen’s Peaches & Cream, but there’s no sticky, sweet, creamy confectionery here. The flavours of the fruit are present – more peach to start, with raspberry coming through in the aftertaste – but they’re delivered in a delightfully floaty way.… Read more
Golden 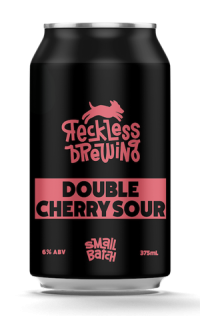 We all had plans scuttled by 2020. For the gang at Reckless Brewing, it meant missing out on the chance to brew a beer for their first birthday. So, when their second came around, the leapt at the chance to brew something delightfully different to their other offerings. Enter Double Cherry Sour – cherry sour since since Jarrod fell in love with the style on his last trip to the US, and double since Grace felt it was only fitting for a beer celebrating two years of Reckless. Pouring a glorious hot… Read more
Red Oat Cream IPA may be Reckless’ biggest beer to date, but this refreshing tropical cocktail goes down easier than the sun sinking into the ocean. Sultana hops are known for bringing a big ol’ pineapple hit to a beer and Sabro hops are famously known for their coconut character. Bring these two together and it’s hard not to start singing the Piña Colada song, even if you didn’t pick up the references on the can’s label. The beer isn’t one dimensional - among the tinned pineapple and desiccated… Read more
Pale Yellow Brewed to coincide with International Women's Day 2021, Frida is a collaboration with fellow Sydneysiders, Reckless Brewing. Named after the early 20th century Mexican artist, icon and all-round legendary figure, Frida Kahlo, this is a bright and tropical XPA that somewhat belies the deeply serious and, frankly, disgraceful level of gender inequality that still exists in this country and the world at large. Really, it’s a testament to Grace, Alice, Katy, Alex, Nichole and all the other women associated… Read more
Pale Yellow