As if launching the first genuine brewery in decades in the popular riverside town of Echuca wasn't enough to catch people's attention, the couple behind Bandicoot Brewing had a unique trick up their sleeves. At a time when Australian craft breweries were starting to look tentatively at cans, Tracey and Bruce Green were also considering aluminium. The difference here was that they launched their beers in aluminium bottles.

It helped get people talking, although the fact that one of their two launch beers, the Rusty Pale Ale, was a beer that didn't hold back on the hop or malt fronts certainly helped too.

In the end, the aluminium took a back seat, however, as former homebrewer Tracey couldn't be restricted to just two beers. The couple wanted to get back to the grass roots reasons behind them starting the brewery, and that was to produce a beer for everyone and look to excite each individual’s palate. They saw drinkers taking a shine to beers such as Tracey’s rich After Dark and the fulsome Belgian Bombshell and, realising they needed to be packaged as well as available on tap, switched to glass to give themselves greater flexibility. And it's flexibility they've made full use of, adding beers such as a summer ale, black IPA, barrel aged imperial stout and English-inspired mild to the lineup since.

As for their home, you'll find them in a warehouse on the Northern Highway as you enter the old port town. It's an unassuming spot for an unassuming couple in which Bruce put his talents to work building the brewery upon which his wife could scale up the recipes that had brought her success in the homebrewing world.

Utilising Bruce’s engineering knowledge, combined with Tracey’s food technology, food production and brewing knowhow, they built the brewery themselves, sourcing equipment from all over globe. With beer quality paramount, the brewery was built using the most sanitary fittings along with pumps designed to be gentle on the beer. They also wanted the brewery to be environmentally friendly so incorporated various energy efficiency and water saving initiatives into the design.

As for the fun stuff, visit their shed and, alongside the brewery, rows of tanks and bottling lines, you'll find a bar that's grown from a tiny tasting operation to an 11-tap setup, including a guest tap. That said, when in Echuca you can sample Bandicoot at a growing number of venues that keep their beers on tap, such as the craft beer friendly Mill or The American Hotel. They’ve loyal supporters elsewhere too, including The Cambrian Hotel, The Square Hotel and Mr Bebe's in Bendigo and The Cherry Tree Hotel in Cremorne.

Considering how populous breweries are in many other regional parts of Victoria – the High Country, Surf Coast, Mornington Peninsula, for example – Tracey and Bruce were their region's lone warriors when they opened, rocking up to festivals and knocking on hotel and bar doors in an attempt to encourage both drinkers and venue operators to try something different – and support local. It's been a slow process but, as the expanding range suggests, they're finding more people starting to explore new flavours – and are popping up on Melbourne taps with increasing regularity too.

As for that broadening range, 2016 saw Tracey, whose nickname gave Bandicoot its name, invest in barrels. A Scotch ale was poured into St Anne's Shiraz barrels, while a Russian Imperial Stout found a home inside oak from Tasmania's Lark Distillery. For a town that hadn't been home to an operational brewery for generations, it's quite an evolution.

If you'd like to chat to Tracey and Bruce about the beers (and we suggest asking Bruce for his thoughts on the Belgian Bombshell), then you can head to the brewery bar any Thursday or Friday and one Saturday a month too when they usually host special events – or pop in for takeaway sales any time they're around. 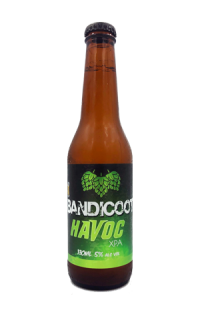 When you call a beer Havoc you're instantly conjuring ideas of bedlam or a riot in the drinker's glass. Yet this XPA – added to the Echuca brewery's core lineup in summer 2020 – is a pretty pared-back offering, at least when compared to much of Bandicoot's range which tends to sit at the heavier end of each beer's style spectrum. It puts new Kiwi hop HORT 4337 in the spotlight, a variety of which much is expected thanks to its vibrant range of fruity characteristics. Pale golden in colour with… Read more
Golden Yellow 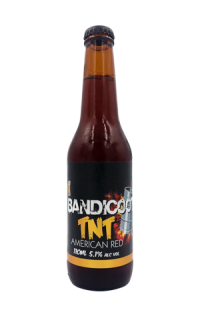 It's perhaps worth pointing out early on here that TNT is tagged an American Red rather than a red IPA before one dives in looking for an aromatic hop punch. It's also worth pointing out that it looks rather like a baby barleywine: a glistening and dense ruddy chestnut liquid with a persistent off white head. Aromas of creamy toffee and bitter citrus peel suggest there's such a big beer lying in wait too, but it turns out to be rather lighter in weight, serving up burnt treacle, a nuttiness, hints… Read more
Red 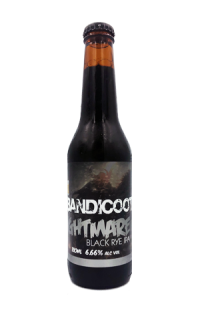 If a nightmare is regarded as dark, then Tracey Green chose the name of her black rye IPA well; it might be a couple of shades off black but, boy, is it impenetrable to light with the appearance of a heavy stout as much as a black IPA. It comes with an ABV of 6.66 percent too, just to keep up nightmarish appearances. The Echuca brewers have held little back when it comes to packing a punch inside every glass too, from the treacly liquorice, bitter chocolate and hints of anise and spice on the nose… Read more
Black 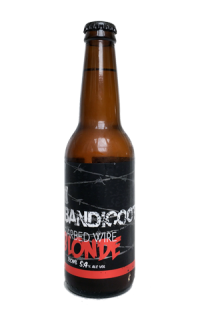 It's one thing wanting to open a brewery where there's been none for ages and then try to win people over to flavoursome beer, but you're probably going to want a beer in your lineup that's not going to scare potential new drinkers away too. And that beer for Bandicoot is the Barbed Wire Blonde. It's a light golden drop, one that's malt led with just a hint of gentle European hop bitterness featuring alongside soft biscuit and honey malts and just a touch of fruitiness from the yeast.… Read more
Golden 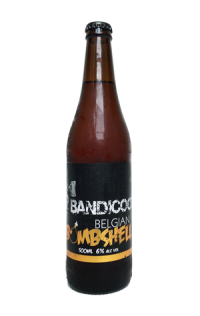 One of Bandicoot's earliest draught only releases, the Belgian Bombshell proved popular enough to graduate to 500ml bottles over time. It's a beer that doesn't fit too neatly into any particular category of Belgian ales; then again, if any country is home to brewers that don't pay too much attention to style guidelines... To try to get a picture, it's close to a strong golden ale in terms of colour and spicy phenolics, but possesses some of the creamier, heavier malty, fruity characters you might… Read more
Golden The search for a quality, flavoursome mid-strength is one that many craft brewers have been embarking on in recent times. For most, the goal seems to have been to create some form of hoppy pale ale of IPA with just the booze reduced. Tracey at Bandicoot, however, looked to the UK where there have long been plenty of bitters and milds that register in the mid-3 percent ABV range. If you were in any doubt, the subtle dig of the name and the Union Jack on the label make it clear what you should be expecting:… Read more
Dark Brown 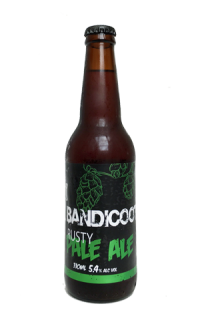 Having looked to cover the "entry level" spot in her opening lineup with the Barbed Wire Blonde Ale, Tracey didn't hold back with this pale ale. Just a glance let's you know that there's a hefty malt bill at play: the beer pours a gleaming rusty colour (hence, presumably, the name) that borders on amber. Liberal additions of New World hops give the beer aromas that range from tropical mango to citrus and pine, with a hint of grassiness in there too. They contribute fruity flavours alongside… Read more
Red 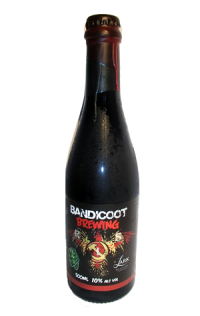 If you're after an indicator of where the Australian beer industry is, this should do the trick. Southern Courage is a Lark Distillery whisky barrel aged Russian imperial stout from Echuca, the port town where, after more than generation after generation without a brewery to call its own, Bandicoot now operates. It's the baby of successful homebrewer Tracey Green and husband Bruce and this is their boldest statement yet. The first batch of the beer spent six months in Lark barrels before being blended… Read more
Black 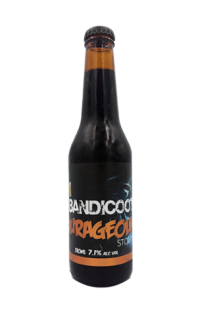 The Bandicoot beer that's arguably got more beer geeks hot under the collar than any other is their Lark Distillery barrel-aged Southern Courage Russian imperial stout. With this seasonal, they're playing in stout territory again but with Courageous somewhat smaller than that luscious beast of a beer and one that features cocoa and coconut. One can only presume that a hefty amount of roasted barley features in the grain bill as there's an intense roast bitterness and high couverture dark chocolate… Read more
Black