Just because a waterfront brewery is busy doesn’t mean the beer is any good. After all, a view of the ocean can cover a multitude of sins. So, if you were to catch a glimpse of the buzzing crowd at Moffat Beach Brewing’s brewpub on Seaview Terrace, you could be forgiven if you wondered whether the view of the Pacific was the best thing it had going for it.

Head in and taste the beer and you’ll quickly change your tune.

Matt and Shaz Wilson’s business came to life in 2012 not as a brewery, but as a café that didn’t yet have beer taps. By late 2020, they’d opened their second location, the Production House, since the demand for their beer was far greater than their Beachside Brewery could provide. (They’d exceeded capacity well before this, but opening a production brewery is not exactly a quick process.)

Obviously, a lot happened in those intervening eight years.

In the meantime, if you want to drink this hero beer at the source, you first have to decide which “source”.

The Beachside Brewery is a funky little brewpub in a prime spot. Inside, the walls are plastered with posters and the food and drink options are plentiful. Start with a coffee and a breaky bowl (or breaky burger if that’s more your thing), and before you know it the beers will be flowing and you’ll be perusing the lunch and dinner menu. The stainless steel brewhouse huddles shyly in the corner, but it becomes the backdrop for live musicians on the weekend as they bring acoustic tunes from between the tanks.

You could go the whole day without straying far from here: there’s a park and playground across the road, the expansive beach beyond, and a stunning lookout over the headland (if you’re willing to walk up the hill).

You have to admit Moffat Beach Brewing’s original location is hard to beat; when you pull up a stool in the courtyard, sip on the champion Moff’s Summer Ale and look out over the eponymous Moffat Beach, you find yourself thinking: “This is the life.”

But if you’re willing to step away from the beach to focus on the beer for a while, the Production House on Caloundra Road offers the full brewery experience.

Unlike the 300 litre kit squeezed into the back of their café, the equipment here was designed for efficient processes, comfortable manoeuvring and with room to grow. It’s a flashy four-vessel Tiantai system that puts out 20hL batches with ease.

The brewhouse is a real showpiece that dominates the area. It’s elevated and blue-lit, giving the impression of tall machines on long legs watching over the taproom’s population. (Yes, I’ve been thinking about War of the Worlds a lot recently. Doesn’t everyone?)

Every table in the venue offers not only a view of the stainless steel monsters, but also a direct line of sight to the bright green shipping container that delivers the precious beer. Every inch of the shipping container is part of a hop bine mural painted free-hand by local artist Steve Bordonaro.

But, while the visual masterpiece draws the eyes, it’s the long row of taps that excites the tastebuds. There are more of Moffat Beach Brewing’s beers on offer than you could responsibly drink in a couple of hours, so you’ll never be short of beers to try or excuses to come back.

Moffat Beach Brewing may have gone from being a hidden gem to shining like a diamond on display. But whether you’re a local, a daytripper, or you’ve scored yourself a beachfront apartment for a few weeks, you’ll want to make yourself familiar with Matt and Shaz’s baby.

From brewing shit beer to champion brewery in three years and from taking two months to shift a keg of IPA to seeing an entire batch of double IPA disappear in a week, the Moffat Beach Brewing Co story is quite the ride.

Take a break from complaining about 2020 to celebrate with the annoyingly optimistic Mick Wust as he looks over a year of beer in Queensland.

Sydney Brewery claimed yet another major trophy for one of their lagers at the 2021 Royal Queensland Food and Wine Show Beer Awards, taking our Grand Champion Beer for their Pilsner.

Stomping Ground enjoyed another fine beer awards today, claiming Grand Champion Beer in Queensland. There were big wins for Ballistic, Black Hops, Felons and Moffat Beach, with the last of these claiming another swag of trophies.

There was plenty of home state glory at the 2022 AIBAs as Hawkers, Stomping Ground and Dollar Bill took out three of the four Champion Australian Brewery titles. Moffat Beach completed the set, with a pastry sour winning Champion Beer. You’d think a beer that could take out Grand Champion Beer at the 2020 Indies awards must have it easy. But have some sympathy for Moff’s Summer Ale; it doesn’t fit neatly into a standard style for competition guidelines. Is it an Australian pale ale? No, it doesn’t quite fit the bill; while there’s passionfruit and mango, there’s also a solid dose of heady honeydew and resin American hop characters shining through that keep it from fitting in here. So is it an American pale ale? No,… Read more
Golden Yellow Many of us have had that strange first encounter with a cream ale when we tasted it and thought, “This tastes like a lager. Where’s the creaminess?” No one really knows where the name came from, but it was likely meaningless marketing fluff, not unlike the way ‘premium’ gets used today. But as an American style designed to compete with German lagers over a century ago, it does alright. When Matt Wilson needed a sessionable lager-like beer for his customers at his tiny Moffat Beach brewery,… Read more
Golden Yellow Their home might be on Australia’s East Coast but the team at Moffat Beach Brewing have a passion for big beers hailing from America's West Coast. Given that California is so far away from the Sunshine Coast, the brewery’s Trilogy - dubbed a Best Coast IPA - is designed to satisfy any hop bomb desires anyone in Moffat's backyard might have. It does so with the trilogy of Mosaic, Strata and Simcoe hops which provide a superb serving of orange, grapefruit rind, pine and just a touch of tropical… Read more
Pale Yellow Moffat Beach Shadow Of The Moon

When it comes to the new-ish Australian hop variety Eclipse, folks generally fall into two categories: those who love it and those who haven't tried it. If you’re not one of the former just yet, Moffat Beach Brewing Co are doing their best to remedy the situation with Shadow of the Moon, an all-Eclipse strong pale ale. Brewed in partnership with Hop Products Australia, the beer was originally intended to be showcased at this year’s BrewCon on the Sunshine Coast before COVID-19 – as it is wont… Read more
Pale Yellow When Matt Wilson fell in love with IPAs years ago, they were always bitter – it’s one of the things he loved about them. So the recent movement of hazy IPAs being low in bitterness didn’t appeal to him at all, and he resisted making one for a long time. But, on a research trip to the States in 2019, he found that he enjoyed a number of the hazy IPAs he tried, so when he returned home he finally gave in and brewed one. Hazed & Confused is stuffed with Mosaic, Galaxy, Amarillo, Strata and… Read more
Golden 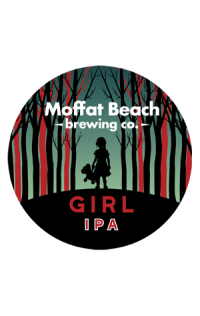 “Wednesday’s child is full of woe hops.” This beer may find something of a kindred spirit in Wednesday Addams (as pictured on the label and masterfully portrayed by Christina Ricci in the early 90s films); her incisive words and dry humour meet their match in the biteyness and dry finish of Girl IPA. But Wednesday’s taciturn demeanour isn’t mirrored here, since this beer doesn’t hold anything back, but shares as much of itself as it can. Pawpaw, grapefruit zest, and a touch of mango braid… Read more
Golden A beer can be more than a beer. Matt Wilson brews this beer in the memory of his army mate Josh Porter, who died tragically in a Blackhawk helicopter crash on 29 November, 2006. It pours a deep gold with glints of red, like you have a glass full of tree sap in front of you. Between the colour and the flavour, this strong pale ale almost nudges into amber ale territory – the malt character is rich enough to stand up to the big citrus hop and the bitter hit. Matt says that, like Josh, this beer is… Read more
Rich Brown 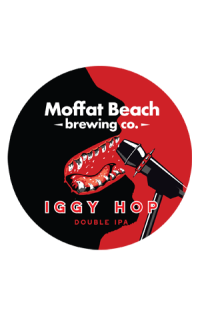 Iggy Hop is a cult favourite at Moffat Beach. Regular customers who used to drink only lagers and balked at any hint of hop bitterness now order schooners of resinous Iggy Hop Double IPA, and complain every time it goes off tap. All American hops Chinook, Simcoe and Mosaic come together in a belting power chord. Grapefruit toffee resonates in the air, and the beer itself tastes like savoury resin and head banging. Between the big flavour, the booze, and the bitterness, this is a beer that just doesn’t… Read more
Golden 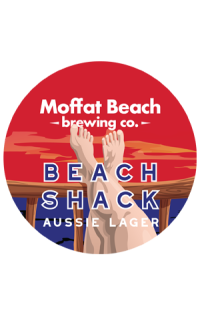 If Matt and Shaz Wilson had a dollar for every person who walked into their brewpub on Moffat Beach and asked for a "normal beer"… well, they’d have a bunch more dollars than they currently do. Of course, what those people mean is: "Do you have an easy-drinking lager?" And since Matt never had enough tank space for lagering in the cosy brewpub, he never brewed a lager there. But, when Moffat Beach Brewing opened their larger Production House, Beach Shack Lager was one of the… Read more
Golden Yellow Swamp Creek sounds like a body of water you might find in the depths of southern USA, complete with ‘gators, clouds of ‘skeeters, and rafts made from bourbon barrels. (Yes, I’m woefully ignorant about that part of the world. I did watch To Kill A Mockingbird in high school, though.) But it’s in Caloundra, not far from from Moffat Beach, and so this Deep-South-sounding creek is perfect to lend its name to a bourbon barrel-aged imperial stout. The barrel in question held Kentucky bourbon then… Read more
Black The cereal in the beer’s name refers to the oatmeal that gives this stout its body, but that’s not the only connection this beer has to breakfast. Cereal Killa is the colour of strong black coffee with a head like Coco Pop milk, and it smells like someone’s turned the dial on the toaster all the way up to six. It rolls gently over the tongue – not too heavy, not too light, but just right – leaving a roasty and bitter trail, with an edge of cola and dark chocolate creeping in. Of course,… Read more
Black