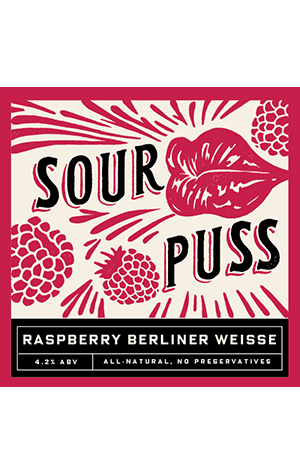 Wayward founder Peter Philip has a wife who loves sour beers. She also happens to love wheat beers. So when she suggested he brew a sour wheat beer, who was he to argue?

He duly obliged with a Berliner Weisse, then proceeded to dump about 60 kilograms of raspberries into it. In addition to a rampant berry aroma, that flooded it with a hot pink colour which made it flamboyant to look at and just as striking to drink; there’s sweetness from the fruit but it's mostly about the sour and tart character which helps give a dry and refreshing finish.

From the time it was first brewed as a gypsy brewed beer to the first batch to come from the Camperdown brewery, Sourpuss dropped around a percentage point in ABV to below four percent and become more in tune with the style. It's been fine tuned since, winning a place in the permanent range and continuing to win fans all over – indeed, when you have born and raised Berliners complimenting you on your Berliner Weisse it's probably a good sign you’re doing something right.

In 2018 the Sourpuss as people knew disappeared only to reemerge immediately, repackaged in cans under the more straightforward name of Raspberry Berliner Weisse. Fans will be pleased to know it's just the same beer and tastes as good as ever.