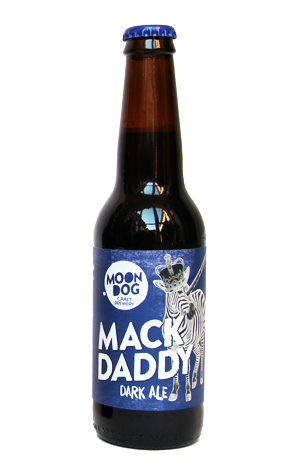 Over the course of 2015, visitors to Moon Dog's ever-evolving and increasingly popular brewery bar may have noticed rather more beers at sensible ABV levels appearing on the blackboard; quite something for a brewery where one brewer once told us they didn't really like their weekly one-off kegs to come in less than 8 percent ABV.

Among them were various pale and dark ale variants: clearly, a plan was being hatched. And that plan was to give the brewery a broader core range of beers. Thus, having initially made their way out in kegs late in 2015, two new bottled, six-packed beers joined Love Tap. One of them is Mack Daddy, adorned with a King or Queen unicorn zebra and references to "back, crack 'n' sack" and lots of other things that rhyme with Mack.

Tagged as a dark ale, it could just as easily be called a hoppy dark ale. That said, it eschews the more citrusy, piney and orangey hops found in some hoppy dark ales and porters in favour of those of a softer melony and peachy bent. They come across most late on in the flavour – topped, tailed and wrapped up in more typically dark ale charatcers: a touch of roast, dark chocolate, nuts, maybe even a touch of sarsaparilla.