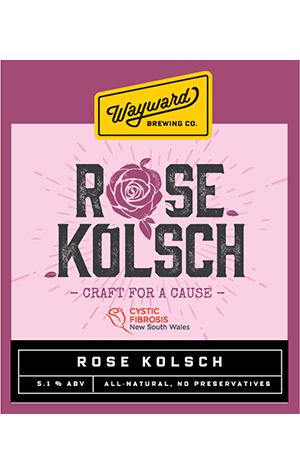 Before the Wayward brewery opened, founder Peter Philip was intent on making the space it occupied a part of the community. One of the ways he’d envisioned doing it was by giving back to it via a series of beers whose proceeds would go to charity. True to his word, the first of these is ready to flow and it’s a rose kölsch that’s been made to raise funds for Cystic Fibrosis NSW.

As the style prescribes they’ve aimed for a beer with a light and clean malt character and European hops of the noble variety, essentially to create a beer that will have a wider appeal. The point of difference comes through the addition of rose petals and rose hips during fermentation. If that sounds like a beer that would all come out smelling like roses, Pete assures us it’s not the case and his own fear of ending up with a potpourri beer was unfounded, instead adding “something special and a little unexpected”. The rose kölsch will be pouring at the brewery all throughout May at the brewery and a handful of kegs will make it to other venues.