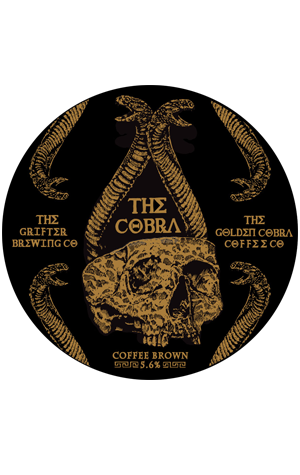 There are probably a fair few in the beer community – brewers, for example – whose liquid intake consists almost exclusively of beer and coffee. Here, then, is a brew for them. Not only because it’s extremely efficient, but because you can taste both in a glass.

Golden Cobra, from which the beer takes its named, is a Marrickville coffee roaster which, like new neighbour Grifter, often deals on the down low and remains one for those in the know. They brewed up 40 litres of cold drip coffee and sent it down the road to the Grifter brewery where they duly poured it into a bright tank containing a freshly brewed American style brown ale.

The blend they’ve created is a fruity affair thanks not only to the hops but the beans which pack in a lot more than just the classic coffee character you’d expect. Indeed, whatever bitterness you do expect is balanced out by that fruitiness, leading to a beer that’s got Grifter’s seemingly adopted motto ‘Fresh & Clean’ written all over it.