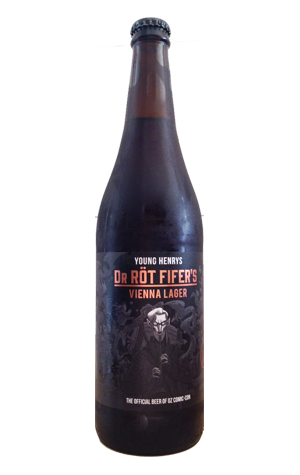 Beer nerds and comic fans have come together for Young Henrys’ latest collaborative effort, created for the Melbourne leg of the 2016 Oz Comic-Con. The OCC is a giant pop culture party you might have to be a little bit into to understand fully – essentially, if the term ‘Cosplay’ doesn’t men anything to you, you’re probably out the outer. But, in layman's terms, it’s basically a massive celebration of all things TV, movies, comic books, graphic novels, anime and gaming.

For this colourful crowd, Young Henrys was invited to team up with local illustrator Doug Holgate to create a beer based around a comic book character. Eschewing the chance to go for the obvious and make a superhero beer, they opted for something darker: Dr Röt Fifer. He’s a character that’s part Pied Piper and all pagan revelry, a purveyor of good times from which you’ll presumably be led astray. Which is basically Young Henrys in costume.

Owing to the Germanic roots of Hamelin’s famed piper, the style they went for was a Vienna lager made with Hallertau Blanc hops. It’s sweet at first, with layers of unripe stone fruit sitting atop a bready and slightly biscuity malt base. There’s a firm bitterness too, but not one that goes beyond where it’s needed. In the glass it’s a gorgeous copper colour that verges on red but the bottle looks even better, covered as it is in Holgate’s dark handiwork.

Taste it first at the official Comic-Con launch at the General Assembly – RSVP here – and at that venue all week then look out for it in bars and bottleshops once Comic-Con is done and dusted.