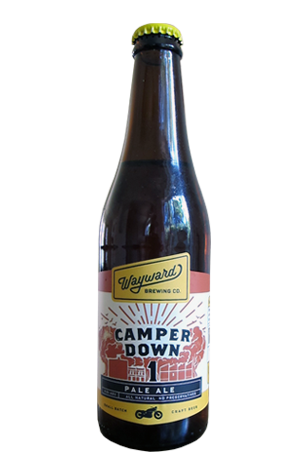 Before the opening of his brewery and during the time he was gypsy brewing his often esoteric beers at various breweries around Sydney, Wayward founder Peter Philip was known to make statements to the effect that he’d never brew a pale ale. It just wasn’t his style. But as the date for the brewery opening approached, his attitude had softened to, “Well, never say never…”. So when the brewery was finally commissioned it wasn’t a total surprise to discover that he and head brewer Shaun Blissett had indeed turned out a pale ale: Camperdown 1. Almost exactly a year later, Camperdown 1 earned another milestone in the history of the company as it got the honour of being the first beer to rattle off Wayward’s brand new bottling line and cement its place in the permanent range.

The beer itself is something of an English-Australian hybrid, leaning on the maltiness of an English pale ale while boosting its aroma and flavour with a hearty dose of Aussie Galaxy hops. There’s a touch of US in there too courtesy of Centennial hops and together they bring a passionfruit punch, orange zest and pine. It’s a solid wee drop at 4.6 percent ABV and there’ll no doubt be plenty of people prepared to thank Pete for having a change of heart.