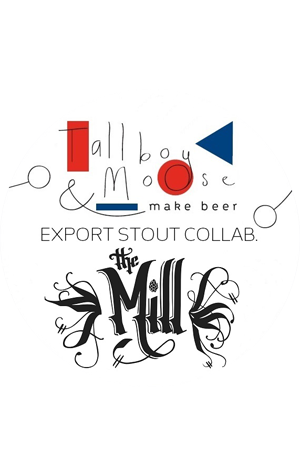 Two of the youngest brewpubs in Melbourne have come together to create a beer. And the genesis of the collab is about as "essence of craft beer" as you could wish for. As the Moose from Tallboy & Moose, Steven Germain, explains: "When The Mill popped up I was thinking back to when we first opened – ramping up our beer offering took a while and we barely got by without running out of stock on our own beers before new fermentations were ready to serve. So I offered Mirek what I wished someone had offered me: a collab opportunity to help keep my taps stocked."

The beer they chose to create with Collingwood startup The Mill is what they're calling a "BIG bold stout with a heap of roast and balanced sweetness" backed up with "a bit of blackberry character" thanks to the use of English Bramling Cross hops for dry hopping. It's on tap at both brewpubs and a couple of other kegs may pop up elsewhere. And, if you like your stouts with a bit of oak, keep your eyes peeled as they've filled a former Starward Whisky barrel with some too.