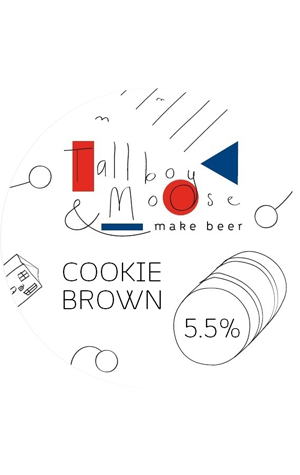 In their previous incarnation as the most nano of nanobreweries, We Make Beer, the duo now going by the moniker Tallboy & Moose put out some seriously experimental beers. There weren't many ingredients they wouldn't consider adding to a beer and, sometimes, their desire to chase new flavours and experiences could lead them to tip the scales a little too far in favour of the unusual ingredients at the expense of having something ostensibly "beer". As Steven "Moose" Germain said when we raised this earlier in the week, it was all part of the learning experience, of testing the water on a tiny scale.

Certainly, if you've been a regular visitor to their Preson brewpub, you'll likely have been more impressed by the cleanliness of Dan "Tallboy" Hall's beers than found anything odd protruding from them. So, while Cookie Brown – a beer brewed with raisins, vanilla and cinnamon (a beer destroyer if ever there was one when not used carefully) – sounds like it could be a riotous, sweet mess, it's in keeping with their more finessed approach. There's a touch of dark fruits, the vanilla adds a little sideline creamy sweetness and the cinnamon a touch of spice, but they're mere ornaments atop an otherwise straight down the line, chocolate and drying cocoa brown ale.