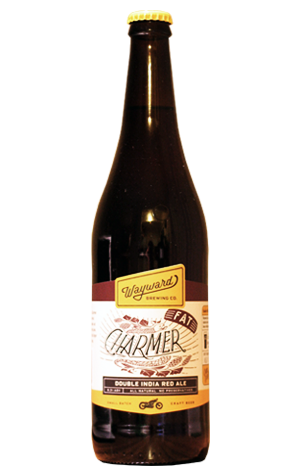 At the risk of exposing oneself to the suggestion of being late to the party, here's a new beer that’s been out for about two years. It was back in 2015, the year they opened their brewery, that Wayward gave its flagship Charmer India Red Ale a bigger sibling, the Fat Charmer. The idea was to essentially double everything that had made, and continues to make, the original so popular: more hops, more malt, more alcohol. Since that first one-off brew it’s actually had a few re-releases, but now things are a bit more serious and regular as Fat Charmer is one of the triumvirate of beers the brewery released to christen the ability of the brewery's bottling machine to dispense 640ml bombers. And what more appropriate packaging for a big beer than a big bottle.

It's undoubtedly a hoppy drop, but the advantage you could argue it has over, say, a double IPA, is that the hops don't dominate on their own. You’ll get plenty of citrus and lingering pine, but the malt weighs heavily in the argument with a chewy, nutty sweetness that keeps the bitterness from running rampant. That sweetness, incidentally, also happens to do a darn good job of helping hide the 8.3 percent ABV. With bottling of this beer set to be a regular autumn affair, there’ll be plenty more opportunities to discover Fatty’s charm.