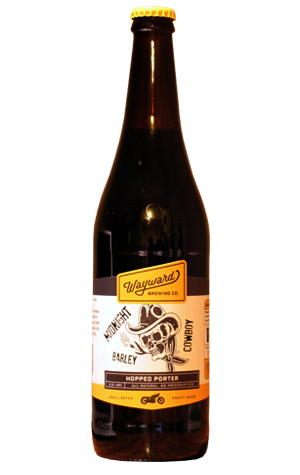 If memory serves, when Wayward first launched the Midnight Barley Cowboy a few years ago it had the air of an enigma. The night was dark. There was a man at the bar wearing a cowboy hat. There was poetry. And there was this beer that didn't really fit neatly into a style. In the intervening years, the mystery drifted ever so slightly as they brewed it a few more times, the cowboy ended up riding off into the sunset, and the poetry – well, that part is still as confounding ever. But it leaves us with the beer we have today, Wayward’s winter seasonal.

It’s part way between a dry stout and a highly hopped India black ale. The roast and coffee characters are the first to hit your palate then, like a slab of something wrapped in gold foil, there's a rich chocolate middle section before it leaves behind a fulsome and lingering bitterness. Contrasting – or perhaps complementing, depending on how you view these things – that is a fair old whack of hops of a citrus and pine bent. Pouring the beer into a glass gives the appearance of it being jet black in colour but, in a decent light, there’s a hint of red around the edges too. As ever, the Midnight Barley Cowboy is not quite as straightforward as you might think.