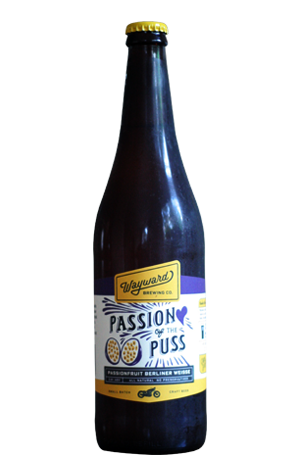 Back in May of this year, Wayward’s Sourpuss Raspberry Berliner Weisse won the trophy for Best European Style Ale at the Australian International Beer Awards. Shortly afterwards, presumably to celebrate the win, they held an event at their brewery called Festival Of The Puss at which they tapped the champion beer alongside seven cousins, all small batches made with the same base beer but infused with something different, from cucumber to fig to blood orange. The one that was deemed to have the most potential at a commercial scale was one made with passionfruit and the Japanese citrus fruit yuzu. Called Passion Of The Puss, it’s back, in bottles, slightly tweaked and built with warm weather drinking in mind.

This is a highly aromatic drop, properly bursting with a very inviting passionfruit and citrus character. On the palate, it delivers more of the same with upfront passionfruitiness giving way to the yuzu effect where a flavour somewhere between grapefruit and lime leans into a notably tart and acidic finish. Fruity but sour, big on flavour but low alcohol – at just 3.8 percent ABV it’ll barely trouble the breathalyser – everything points towards this puss being a popular presence around town this summer.