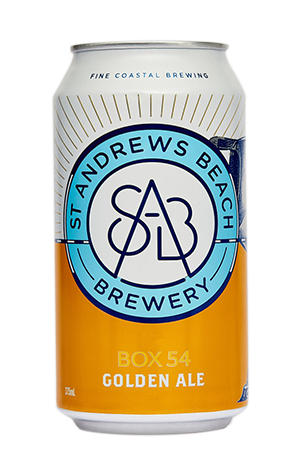 Of all the boxes at the former Markdel training facility, none had quite as famous an occupant as Box 54, which housed Makybe Diva, the triple Melbourne Cup winner. Little surprise, then, that when looking to pay tribute to the venue's past life Box 54 was chosen as the title for one of the core range beers.

The beer is a golden ale, but it's one a fair way removed from beers of the style that seemed ubiquitous in the local craft beer world just a few years before St Andrews Beach Brewery was even a spark of an idea. Back then, "golden ale" seemed to be attached to beers in which the hop and malt character had been stripped back so much the beer was barely distinguishable from a pale lager. With times and tastes changing rapidly, however, you could almost tag this as a New England style golden ale.

For a start, it pours a seriously hazy, bright yellow and is loaded up with plenty of tropical and citrusy hops, most notably Galaxy, used at the dry-hopping stage and delivering the passionfruitiness that helped make it one of the most in demand varieties on the planet.