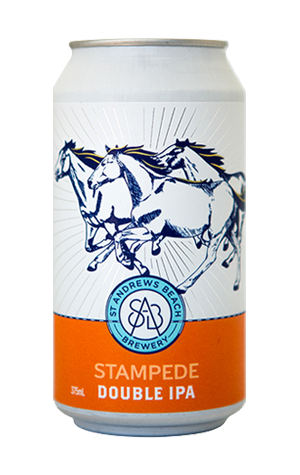 Maybe it was a premonition. Maybe it was wishful thinking. More likely it was just a name that fitted both the beer and the brewery's history, but St Andrews Beach Brewery's third Barrier Trials release could well sum up what Victoria's breweries, bars, cafés, wineries, distilleries and so on will be hoping for in the coming days and weeks (in a COVIDSafe manner, of course).

Easily the biggest beer the Mornington Peninsula Brewery have released to date, Stampede is a double IPA based around new US hop variety Lotus. But, before we get to the liquid, a word on the can labels, which are glistening, embossed throughbreds in their own right.

As for the liquid, the aromas are like sweet citrus and ripe, pineapple-led tropical fruit drizzled over a caramel tart. Indeed, there's a patisserie vibe throughout – not that I'm saying this is a "pastry" beer in any sense – as flavour wise there's an orange marmalade or orange-cake-with-a-dash-of-Cointreau-splashed-over-the-top richness at play. There's and a little stickiness to match (it is 8.6 percent ABV, after all), and a touch of booziness completing the picture.