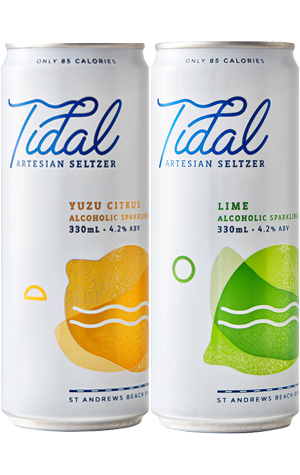 While it's still early days and we'll likely not be able to make much in the way of a judgement call about hard seltzer in Australia until we've had the next summer (assuming things are in any way normal by then), it's already apparent there's some variety to be found in the offerings from local producers. With their entry into the fledgling market, St Andrews Beach Brewery on the Mornington Peninsula have eschewed the pastel shades favoured by many here and overseas; their slim, white Tidal cans instead look very much in keeping with the sort of carbonated booze-free waters their target audience will be used to, albeit here the contents are brewed from local water, cane sugar, yeast and fruit.

As for the liquid, it's crystal clear and offers a carbonation that's present without being overbearing. Where these differ from some hard seltzers I've come across is – in the case of both Yuzu Citrus and Lime – the fruit character is subtle rather than upfront. Think of those sparkling waters "with a hint of" fruit and you're on the right track. It's not too far from the experience you'd get from squeezing a slice of each fruit into a glass of sparkling water, actually; it's just that after a few you'll be refreshed and a little tipsy.

Note: there may be other hard seltzers released by St Andrews Beach Brewery, but we won't be writing about them. We're happy to let readers know which breweries are playing in this space, but we're a beer website and need to focus our attention on the diverse array of beers being released.