In a country in which craft beer continues its seemingly inexorable rise, breweries are beginning to appear in all manner of unlikely spots. While reimagining an old warehouse in an industrial corner of town still seems to be the primary mode of transformation, beer tourists can discover much else on their travels.

Among the more unlikely brewery locations is the site upon which St Andrews Beach Brewery now sits: the 38-hectare former home of one of the world’s leading thoroughbred training facilities.

Markdel, at Fingal, was operated by Australian horse racing royalty for more than a decade. Over that period, the Freedman brothers turned out a long line of champion thoroughbreds, most notably triple Melbourne Cup winner, Makybe Diva.

Eventually, the brothers decided to sell the grounds, with most of the siblings moving away from training horses altogether. Unsure what would happen to a property that enjoys almost uninterrupted views of Bass Strait, the grounds and stables lay unused for three years, waiting for a good idea to come along.

That idea came from Andrew Purchase, another man with a background in sport – in his case, building and designing golf courses – who had worked closely with the Freedmans to create Markdel. Years earlier, Andrew had been persuaded by friends to invest in a brewery, Heads Beach Brewing Company in the French beachside town of Seignosse, and had fallen in love with craft beer.

Andrew felt the 38-hectare property next to St Andrews Beach would make the perfect spot for a brewery so, along with Michael Freedman and professional jockey Tommy Berry, set out to create one.

The idea became reality just before Christmas 2017, as St Andrews Beach Brewery opened its doors to huge crowds and joined the swelling line-up of breweries that are now found on the Mornington Peninsula.

To walk into St Andrews is to walk into a beer garden designed with laid-back, lazy days in mind. Tables line the pathway and lawns leading you towards towards the bar. The beer garden’s pièce de resistance, however, is the converted horse stables on either side. Each one now houses a booth ideal for families and groups looking for a place to spend long afternoon sessions. All are named after the famed horses that once tore around the grounds.

The bar itself is a large, open space accessed via large, retractable glass doors; the space is filled with share tables and comes with an acoustic roof designed to keep things lively without filling with noise when visitor numbers swell. Peer through the large glass windows lining the back wall of the bar and on full display is the brewery’s 25 hectolitre brewhouse, allowing drinkers to see how and where their beer is made.

The beers themselves celebrate the property’s history, with names such as 6 Furlongs Pale Ale, an ode to the track’s length, and Box 54 Golden Ale, named for Makybe Diva. They were designed by master brewer Dermot O’Donnell, who brought with him more than 50 years' experience in the Australian beer industry, with day to day operations led by Matt Stitt, who joined from the Hunter Valley’s Hope Brewhouse. Most of the beer is sold through the taps a few metres away from where it's produced, with the entire core range available for takeaway in bottles too.

It’s not only a brewery, bar and beer garden housed at the ground – most of the property has been given a new lease of life. A hop farm has been planted while vast swathes of the old track now have varieties of old English cider apples and pears growing upon them, ready to swell the homegrown booze offerings in time.

There’s also a two-acre vegetable garden supplying a kitchen that produces a menu primarily designed for sharing and grazing: small plates of oysters, wings and baos out of the kitchen alongside a selection of pizzas and larger items which conjure beachside dining.

In 2021, the location's reinvention continued with the opening of The Barn, a retail space that not only stocks merch and the brewery's full range of beer and seltzers for takeaway but also fresh produce grown on its farm and meals prepped by the kitchen team.

The reinvention extends to most of the buildings on the site: the area behind the brewery is being converted into a tasting room for brewery tours, more stables are in line for conversion and the old feed sheds still hold grain, albeit now destined for your glass rather than a thoroughbred. While it's still early days and we'll likely not be able to make much in the way of a judgement call about hard seltzer in Australia until we've had the next summer (assuming things are in any way normal by then), it's already apparent there's some variety to be found in the offerings from local producers. With their entry into the fledgling market, St Andrews Beach Brewery on the Mornington Peninsula have eschewed the pastel shades favoured by many here and overseas; their slim, white Tidal cans… Read more
Pale Yellow If you've paid a visit to St Andrews Beach Brewery since it opened at the very end of 2017, you'll be aware that it's an operation where enticing as broad a spectrum of visitors to a brewery venue unique in the world of Aussie beer is of greater import than blowing beer geeks' minds. And the first beer to hit taps at its Mornington Peninsula home after the opening quartet of pale, golden ale, lager and pilsner sticks to that ethos. It's a session ale, weighing in at just 3.5 percent ABV, that we're… Read more
Golden You've opened a brewery in a popular tourist region, your venue has a large capacity, you're going to be busiest in the hottest months and you're aiming to bring in a wide spectrum of guests – families, locals and tourists as well as beer enthusiasts. In other words, it's not a bad idea to have a broad appeal lager on your lineup. Given the man designing the beers for St Andrews Beach Brewery's launch comes with more than 50 years in the Australian beer industry, it's fair to say he knows his way… Read more
Golden Yellow Of all the boxes at the former Markdel training facility, none had quite as famous an occupant as Box 54, which housed Makybe Diva, the triple Melbourne Cup winner. Little surprise, then, that when looking to pay tribute to the venue's past life Box 54 was chosen as the title for one of the core range beers. The beer is a golden ale, but it's one a fair way removed from beers of the style that seemed ubiquitous in the local craft beer world just a few years before St Andrews Beach Brewery was even… Read more
Pale Yellow The training track at Markdel measures six furlongs and, while it's no longer alive with the sound of pounding hooves, it does live on as the name of the brewery's popular pale ale. 6 Furlongs is an American style pale ale, one that retains the bigger malt profile of some classic beers of the style rather than opting for the leaner, more stripped back approach often found with contemporary releases. This sweet caramel side of the beer, while created with specialty German malts, is reminiscent of… Read more
Rich Brown The second lager in the St Andrews Beach Brewery core range is one that offers a step up from the simplicity of The Strapper. Race Day is inspired by European pilsners, but comes with a New World update. Underpinning things is a relatively bold malt base – there's some toasty, biscuity character there – although it's more about the hops. A combination of Czech Saaz and a Kiwi bred offshoot of that classic hop deliver the familiar herbal and spicy Czech pilsner aromas and flavours alongside something… Read more
Golden 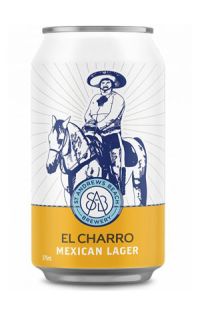 First brewed for GABS 2021, El Charro has been welcomed back into the stud by the team at St Andrews Beach Brewery, not least as this time of year should suit a Mexican lager a little better. Alhough the brewery says it was a hit at the beer festival in May, when you’ve got a beer brewed with corn, agave, lime and sea salt, it feels like something designed for post-swim refreshment more than a small taster as winter approaches. The beer couldn’t pour any clearer: a golden, straw-coloured beer… Read more
Golden Yellow Maybe it was a premonition. Maybe it was wishful thinking. More likely it was just a name that fitted both the beer and the brewery's history, but St Andrews Beach Brewery's third Barrier Trials release could well sum up what Victoria's breweries, bars, cafés, wineries, distilleries and so on will be hoping for in the coming days and weeks (in a COVIDSafe manner, of course). Easily the biggest beer the Mornington Peninsula Brewery have released to date, Stampede is a double IPA based around new… Read more
Golden Now, I'll confess I'm not much of an expert when it comes to the nags. I do recall always asking Dad to put a couple of quid on Corbiere in the Grand National back in the 80s (but only after it had won its single trophy), went to a meet at Clonmel while on holiday in the south of Ireland once at which my clearest memory is having a bird crap on me, and had a great day at Flemington with Mum last time she was over on which we managed to come out ahead. But I'm not sure that even counts as a passing… Read more
Dark Brown