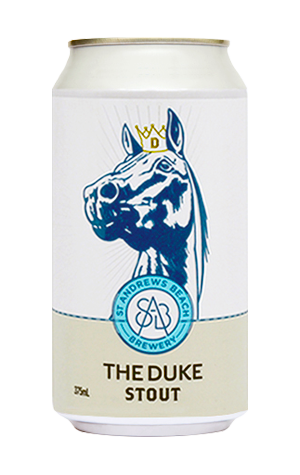 Now, I'll confess I'm not much of an expert when it comes to the nags. I do recall always asking Dad to put a couple of quid on Corbiere in the Grand National back in the 80s (but only after it had won its single trophy), went to a meet at Clonmel while on holiday in the south of Ireland once at which my clearest memory is having a bird crap on me, and had a great day at Flemington with Mum last time she was over on which we managed to come out ahead. But I'm not sure that even counts as a passing interest.

So, I can't tell you which racehorse called The Duke lends his name to the second Barrier Trials release from St Andrews Beach Brewery, but given he's been given a fancy embossed label and a gold crown, let's assume he's a good 'un. The beer he's adorning is a stout and it's one with its sights set firmly down the middle of the track. Based around flavours and aromas that sit somewhere between dark and milk chocolate, topped with a dusting of finely crushed coffee beans. It's medium-bodied and soft on the palate thanks to rolled oats with a low bitterness that keeps it as snuggly as a woollen blanket draped over the thoroughbreds through the Mornington Peninsula's chilly winters.

Traditionally English in style, neither dry nor overly sweet, but a well-judged display of darker malts.