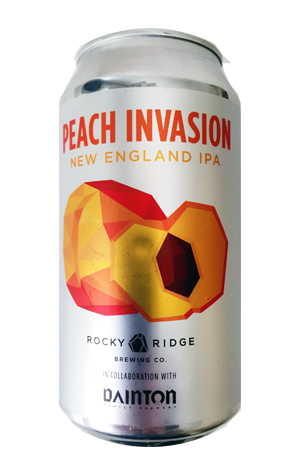 Serendipity seems to surround Rocky Ridge Brewing Co’s Hamish "Hammer" Coates. Sure, there’s a lot of hard work involved too but the last four specialty releases - some of the most sought after beers in WA – have been kindly kissed by Lady Luck at one point or another. Most famously, the potential drain pour of Sour Buffalo – which made it to the Crafty Pints Best WA Beers 2017 – became a Coffee Infused Sour Golden Stout that’s spent the last few months bending minds and palates.

The element of chance struck the fifth specialty release when Dan Dainton from Dainton Family Brewing was in Perth for a couple of events late last year. A chance meeting saw Dan bundled into Hammer’s car and driven two-and-a-half hours south for a one-off collab with the recipe settled during the drive. By the time they arrived in Busselton, Peach Invasion, a fresh peach NEIPA, was ready to be brewed.

The collaboration gives Rocky Ridge the opportunity to play around with ingredients that aren’t indigenous to the brewery property, in this case Wyeast London Ale III and El Dorado hops, to amplify the 40 kilograms of South West peaches that were added to the 3,000 litre batch post-ferment. However, staying true the brewery’s "Everything we brew, we grow" ethos ethos, all malt was site grown and there is a small addition of Goldings from Rocky Ridge’s hop crop.

The resulting beer’s massive peach nectar aroma follows through to taste and is complimented by a little pineapple and tea character before closing out with a chalky finish. The NEIPA style haze is restrained – less the typical lupulin fog; instead a city of gold-like mist. It's proved an irresistible combination for beer lovers, with the beer now part of Rocky Ridge's core range.