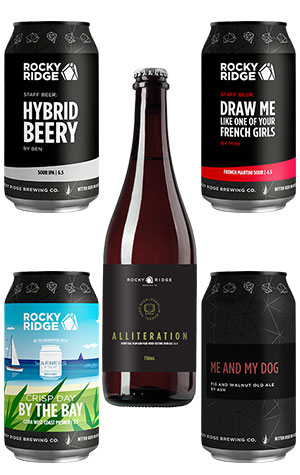 Rocky Ridge have made a habit of releasing motley collections of beers in rapid-fire succession and their first foray in 2023 is no different: it features a quintet of beers ranging from a large format sour and a hybrid to a 12 percent ABV old ale and an ode to one of the cinematic world’s biggest moments.

Starting light is Hybrid Beery, a sour IPA that gives off very refreshing green mango and grapefruit vibes. Exceptionally clean with bold sweet/sour character, Hybrid Beery is in a class of its own.

Draw Me Like One of Your French Girls, a reference to James Cameron’s epic Titanic, is a light and bright French Martini Sour which is certainly no shipwreck, although plenty could certainly find themselves being sunk… (sorry). In any case, there is a vague essence of French martini here but, importantly, sweet fruit and light acid combine for a refreshing and highly repeatable beer in which cherry features heavily.

Me and My Dog, a beer concocted by long time brewer Ash Gale, is a rich affair. Loaded with fig, walnut and landing at 12 percent ABV, this old ale is inspired by new thinking. In a world full of pastry stouts, this classic style stands tall with a familiar, decadent sweetness and a stack of complexity thanks to layers of malt and a velvety body that carries stewed fruit and spice effortlessly.

Crisp Day By The Bay, created in collaboration with Warners at the Bay bottleshop, is a simple but unique offering. Well suited to the steadily warming Perth summer, this Citra-hopped West Coast pilsner is – as suggested on the can – a crisp pilsner base beer loaded with bright Citra hops, combining the refreshing character of pilsner malt with cleansing lemon-lime notes, yielding an a refreshing drop in which bitterness and breadiness play solid support.

Finishing big, Alliteration is the latest in a series of large format experimental sours from the Rocky Ridge barrel program. Here, a mixed ferment plus pears and plum atop a saison base beer create an intensely complex sour with crunchy acidity and puckering underripe fruit character. Some funk and yeast esters are present while acidity pleasantly lingers underneath a soft carbonation.

Rocky Ridge have delivered punters some serious variety with their latest haul, showing their breadth of experience across a range of styles, including some idiosyncratically Rocky Ridge interpretations...