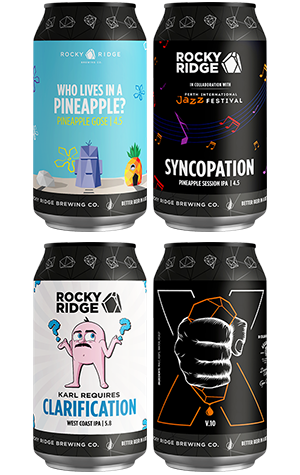 Hot off the back of their hugely successful Retro Beer Fest, Rocky Ridge have pumped out four fresh beers from their Jindong headquarters (five if you include the new core range sour we'll get to elsewhere). From fruited and sour to hoppy and iconic, this swag has something for just about everybody.

Starting fruity and you have not one, but two pineapple-spiked beers; a 4.5 percent ABV pineapple gose and a pineapple session IPA. The former is a mouth-puckering, strikingly sour offering with persistent fresh pineapple character that's aptly named Who Lives In A Pineapple – an ode to the famed Spongebob Squarepants – while Syncopation, the pineapple SIPA, is an entirely refreshing IPA that features undertones of pineapple and just a touch of acidity.

Keeping things hoppy is the annual and much-anticipated Rock Juice, now in its tenth reiteration. Carrying on from previous years, 2022’s version is still a triple IPA, landing at 10 percent ABV. But, as is the way for the famed Rock Juice, this version comes with its own spin and hop additions that vary from past versions. Galaxy, Vic Secret, Mosaic, HBC 586, Mosaic LUPOMAX, Idaho 7 Cryo & Cryo Pop all found their way into tank after a high kräusen, along with Motueka hop oil from Clayton Hops in NZ.

All in all, Rock Juice is a familiar beast featuring improvements from RJ’s gone by, with sweet orange, passionfruit, pineapple, citrus and a candied fruit sweetness all there atop a solid body, a firm bitterness and a long finish.

NB We've just announced another Crafty blind tasting, this time at Rocky Ridge's TapHouse in Busselton on January 13, 2023. We're pitting the best of the South West against their WA peers. Details here.